Rangers turned their league form on its head as they comfortably progressed to the UEFA Europa League last 16, with a 4-2 aggregate victory over in-form Braga. It was a controlled, mature, almost-perfect European away display from the team and one that they should be proud of. However, the margin of victory could have been greater after they missed a first-half sitter from Florian Kamberi and their penalty woes continued as Ianis Hagi passed up his chance from the spot after Raul Silva handled the ball in the area. However, those earlier chances were made redundant when Ryan Kent raced onto Hagi’s through pass and slid the ball calmly past Matheus to give Rangers a deserved spot in the next knockout round.

Steven Gerrard was brave. He went with the same narrow shape from the first leg and this time the gameplan and shape were faultless. He made four changes from the same team that drew 2-2 at McDermaid Park against St Johnstone. Borna Barisic came in for Andy Halliday, Steven Davis replaced Joe Aribo, George Edmunson came in and replaced Niko Katic, while there was one enforced change and that was Florian Kamberi starting as the lone striker in place of the suspended 29-goal Alfredo Morelos.

Rangers’ pressing was organised and had variety

Rangers’ pressing for the first hour last week was broken and all over the place. However, they were able to mix their pressing game up and that caused Braga some issues. As the above image indicates, Ryan Kent is the first trigger of the press. He forces Braga to play the pass back to Matheus, then Kamberi presses, and when Matheus finds Raul Silva, Hagi is right on top of him, meaning he cannot take a touch and find Sequeira, he has to play it blind. Ryan Jack, who is given the licence to press higher is able to recover the ball.  Unfortunately for Rangers, the move broke down. Raul Silva the Braga no.34 lost the ball eight times in total during the 54 minutes he played and three of them were in his own half. He also committed three fouls, one of which led to the penalty.

During this phase of pressing, Hagi forces the Braga wing-back to go inside then continues pressing the free man. The free player is now forced to pass backwards again to the centre-back, while Kamberi and Kent force them to go back to the keeper as it became a 2vs2 press. Furthermore, Rangers defensive structure is excellent the midfield three are compact enough and force Braga’s midfield to go looking for the ball, and that means they cannot make moves to get in behind for an easy progressive out ball. The effectiveness of the press is shown by Braga having to play the ball backwards 81 times and laterally 263 times compared to Rangers’ 35 backwards passes and 57 lateral passes.

Rangers this time went for the man-oriented press down the right flank. Hagi put the full-back under pressure, while Tavernier and Jack double up on the Braga wide players, with Tavernier being the more aggressive presser and Jack following the runner. Braga manage to break the press with the pass inside, but their attempts to switch the play were thwarted by good positional play of Scott Arfield. It allowed Rangers to re-gain possession and start another attack.

Arfield was pivotal in how Rangers recovered the ball and was outstanding out of possession all evening. He won six out of his eight duels (76%), made eight ball recoveries, seven being in his own half, and intercepted the ball eight times.

The image above shows Braga trying to build down their right-hand side. Steven Davis closes down the midfielder –Fransergio– who is about to enter the shaded area. This pressing and Scott Arfield cutting off the passing lane to the inside-right channel gives the player on the ball one option: to knock it in behind – and Rangers can see that out comfortably, forcing Braga to go long and wide. Again Rangers have 2vs1 on the ball side.

The above image from late on in the match indicates Rangers forcing Braga to go wide and then coping with his movement. Jack, Tavernier and Aribo create a 3vs2 overload while Sheyi Ojo cuts Joao Novais out of the play by just standing in his area. This Braga are forced to try the one-two but in the end, Joe Aribo wins the tackle but he’s ably backed up by Steven Davis due to Ojo picking up Novais, and Scott Arfield marking Fransergio. Numerical advantage on the ball side – gives Rangers a better chance to win it back.

Braga’s left was the area of the park in which most of their attacks originated.  17 came from the left with nine from the central areas and 10 from their right-hand side. In total, 27 attacks came from the wide areas. It led to the hosts crossing the ball 31 times with just 10 of those being accurate. Furthermore, despite having the majority of the ball they only managed one shot on target – it came during the first half.

The centre-halves performances were outstanding and assured, as they worked superbly against a team that scored two goals at Ibrox last week  – those numbers are evidence of that.

The above image is the build-up to the Kamberi chance. Kent is surrounded by three Braga players yet manages to poke the pass through. The high line with David Carmo stepping out and the full-backs caught infield unable to cover allows Arfield clear after timing his run well.

This is the goal. Goldson and Jack move it quickly allowing Rangers to transition from defence to attack in three passes. Jack beats Braga’s double press and the pivot of Braga’s midfield allows Hagi the space to play the key pass in behind. The Braga defence should be where the red line is. However, because they are high and Carmo is deeper it allows Kent in behind to the shaded blue area, which he takes full advantage of by scoring the winner. You have to think if Braga drop five yards, they don’t get caught out like that. The goal also displays the value of quick transitions. It was perfect from a Rangers point of view.

In conclusion, Rangers were deserved winners. Despite not being clinical, their ability to hold their shape, press and the correct times and hit on the break against that high line should not be underestimated. It was a superb tactical display and is evidence of why Rangers are now in the last 16. The task now is to translate these European performances to the domestic scene for the remainder of the season starting on Saturday evening at Tynecastle in the Scottish Cup quarter-final. 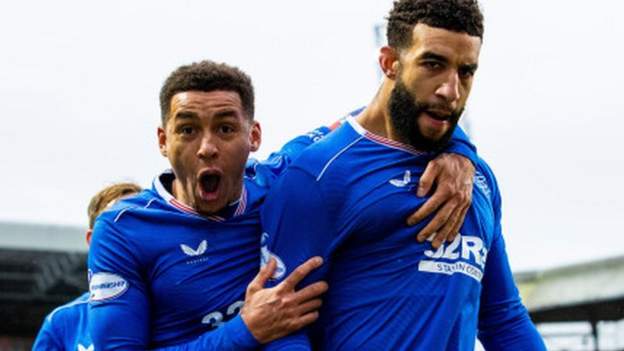 5 Aug 2020
question_answer0
So that’s week one in the bag in the Heart & Hand league on Fantasy Football Scotland’s game, and a…