Time was ticking down at Ibrox on Wednesday night. New Rangers signing Ianis Hagi had been enjoying a fine full debut and Rangers, after a stuttered start, were continually knocking on the Hibs door with wave after wave of attack. But as the scoreboard clicked to the 84th minute with the score still stuck at 1-1, it looked increasingly like yet more points would be dropped at Ibrox. And with Celtic making short work of Motherwell at Fir Park the gap in the title race was about to widen. Just then Connor Goldson hooked a header back into the Motherwell box. Hagi watched the ball drop over his shoulder and swung his right foot at the ball, firing it into the goalkeeper’s right-hand corner and sending Ibrox into raptures. Ianis Hagi had arrived as a Ranger.

It can’t be easy to plough your own furrow in the football world when your father is a celebrated, much-loved figure, adored by millions. Just ask Josh Windass. Okay, bad example. But just imagine your father is the greatest player your country has ever produced. And that country is Romania. And that father is Gheorghe Hagi – “Maradona of the Carpathians”. The elevation given by the family name and genes could easily be weighted down by intense expectations and lofty forecasts. Rangers’ new signing from Belgian champions K.R.C. Genk has had to learn to carry the weight of his name and manage expectations — both external and internal.

Romanian sports journalist, Emanuel Roşu has followed the young attacking midfielder’s career with a keen eye and is confident Hagi junior has the character to carve his own path in the game. “Ever since he was born, people were expecting him to become a football player,” says Roşu. “That’s a big pressure put on him from the outside, and there’s also the pressure he puts on himself because he’s very demanding of himself. He has the right attitude towards football and is a great character, as well as a very good player. He’s focused on his career and has sacrificed a lot.”

But with admiration comes envy and doubt from outsiders. “Growing up, he has had lots of haters saying: ‘you’ll never be like your father’. But he faced all that and it really made him stronger. And now he has become a real man, I think he’ll be able to show what he’s really made of,” says Roşu.

Along with inheriting his gift with the football, Hagi also has his father to thank for providing him with the best introduction to the game. After a stellar career on the pitch, Hagi senior risked a great deal to give something back to Romanian football — and gift young Ianis his start in the game in the process.

From king to lunatic

His friends thought he was crazy. His name – Hagi – was renowned across the football world. Named Romanian Footballer of the Year seven times, he was widely regarded to be one of the brightest footballing talents of the 1980s and 1990s. He had enjoyed adulation within Romania at the heart of an imperious Steaua Bucharest side before thrilling crowds in the colours of Real Madrid, Barcelona, and Galatasaray – where fans labelled him ‘Comandante’.

The highlight of his 124 caps for the Romanian national side was marshalling his nation to the quarter-finals of the 1994 World Cup. The adoring Romanian supporters dubbed him “Regele” (“The King”). But with his playing career over and an up and down spell in management behind him, suddenly the talk of the town was that The King had lost his marbles. Hagi’s friends were incredulous that he was planning to plough his hard-earned millions into starting a new football club, Viitorul Constanța, with players sourced from his Gheorghe Hagi Football Academy.

“He was regarded as a lunatic when he started the project,” says Roşu. “He was absolutely alone in this adventure. All his friends told him he was crazy and was not focusing on his family’s future because he was investing his money in this academy. But he said: ‘I have a dream. I have to return to football what it has given me’. He started from scratch in a place with no electricity, no water, in a place where there used to be shepherds running their herds before he started the academy.”

Spurred on by its young talent, Viitorul Constanța rose from the third tier of Romanian football to enter Liga I in 2012. Hagi appointed himself manager of Viitorul Constanța in September 2014 and in 2017 led Viitorul to their first title. The talents to emerge from the academy, into the first team, and onto the wider world stage included Florinel Coman, now of Romanian Ligue I rivals FCSB; Răzvan Marin, a €12.5m signing for Ajax; and perhaps the country’s brightest hope, Gheorghe’s son Ianis.

“What Gheorghe Hagi has done at Viitorul Constanța is absolutely amazing,” says Roşu. “They have important young players coming into the team from the academy every transfer window, which Hagi transfers into mini stars.”

After a brief cameo against Aberdeen on Saturday, the Rangers support were given a proper introduction to the young Romanian against Hibs. He was given the expected ‘Welcome to Scottish Football’ by the Hibs defenders — dumped on the deck several times in the early part of the first half. But he was always asking for the ball — always looking to create. “He’s a classic number 10,” says Roşu. “Maybe the version of a number 10 that you don’t see much of these days.” Hagi was capped by the Romania national team even before his starring role at last summer’s Under 21 Euros and has made that sacred Romanian number 10 shirt his own.

His strengths are probing and creating in the midfield, constantly trying to unlock defences or pick out passes — attributes which could be a key strength against the packed defences Rangers routinely face. “He’s very creative and likes to play decisive balls,” says Roşu. “He wants to do special things. He’s also strong with free kicks and corners. He’s not afraid to try the impossible.”

Unlike his father, who relied largely on that magical wand of a left foot, Ianis is adept with both feet. This was exemplified magnificently in a Genk match versus St. Truiden in September last year when Hagi dispatched a penalty with his right foot before smashing in a second spot kick with his left. Roşu says this feat was not borne of arrogance, simply a confidence in his own ability – Hagi is more your sensitive, smart player than big-headed prima donna. “He did that just because he can,” says Roşu. “The ball hasn’t got too many secrets for him.”

One hurdle Roşu believes Hagi might have to overcome is adapting to the physicality inherent in Scottish football. This physicality was on show from Hibs on Wednesday night and allowed to flourish by an astonishingly inept refereeing performance by Bobby Madden. Despite this, Hagi’s tenacity and determination was on show as he continued to pick himself up to excel in a commanding second half performance, capped with the match-winning goal.

None of us need reminding that Hagi is entering a league where Ryan Porteous leg-breaking lunges are brushed off as simply “letting the player know he’s there” or Alan Power studs to the face is deemed “slightly mistimed”. Or indeed where a bit of showboating ala Nathan Oduwa’s rainbow flick receives more condemnation than a Ryan Bowman forearm smash to the snout.

This is the world Hagi is entering and the early signs are good that his quick feet and sharp football brain can keep him one step ahead of the cloggers. “He’s very technical, very smart on the pitch and he does things you don’t expect. But his two problems might be: a lack of physicality and running back to track opponents. He’s not the type of indolent guy who doesn’t run — he does run — but the tactics at Viitorul where he grew up were like this. Gheorghe Hagi doesn’t ask all his players to come back — he wants two or three to stay further up the pitch so he can build attacks very fast. Maybe that is why Ianis is used to this style. But I think you can correct that and he has a very good attitude towards the game.”

Out of the shadows

Inconsistency and a change of manager at Genk certainly didn’t help Hagi’s cause in Belgium but Rangers provides him with a platform to truly make a name for himself in the game and step out of his father’s shadow. And with a reported option to buy of €5m Roşu believes Rangers might have hit the jackpot.

“I think he can delight the Rangers fans. This move to Rangers shows a lot of maturity from him,” says Roşu. “He wanted to feel important and to feel the love of the fans. I think this shows he’s 100 per cent a man and not a boy anymore. It’s a risky move, but he didn’t want to sit on the bench at Genk. He wanted to feel important, to feel the fans behind him, to feel the pressure of getting big results. And Rangers have quite a chance to do something this season and challenge for a title.”

Rangers supporters know more than most the demands we place on players and it will serve Hagi well that he is used to that weight of expectation. He’s had it ever since he rocked up to his father’s academy as a ten-year-old. A match-winning goal on his full debut will certainly do him no harm in the eyes of the blue faithful.

After the hysteria had subsided after his strike, Hagi trotted over to the camera behind the goal to send a message to his famous father on his 55th birthday. If Hagi can continue to build on a spectacular start in a Rangers shirt then that might not be the last time we’re having a 55 celebration this season. Here’s hoping.

Player Ratings – A Tough Look Back

Looking at the last 7 games from a player performance perspective.

Rangers got back to winning ways against Livingston, with a solitary Scott Arfield goal in the second period. It wasn’t the vintage performance we all had hoped for but that could have been down to the terrible conditions but it was a win nonetheless 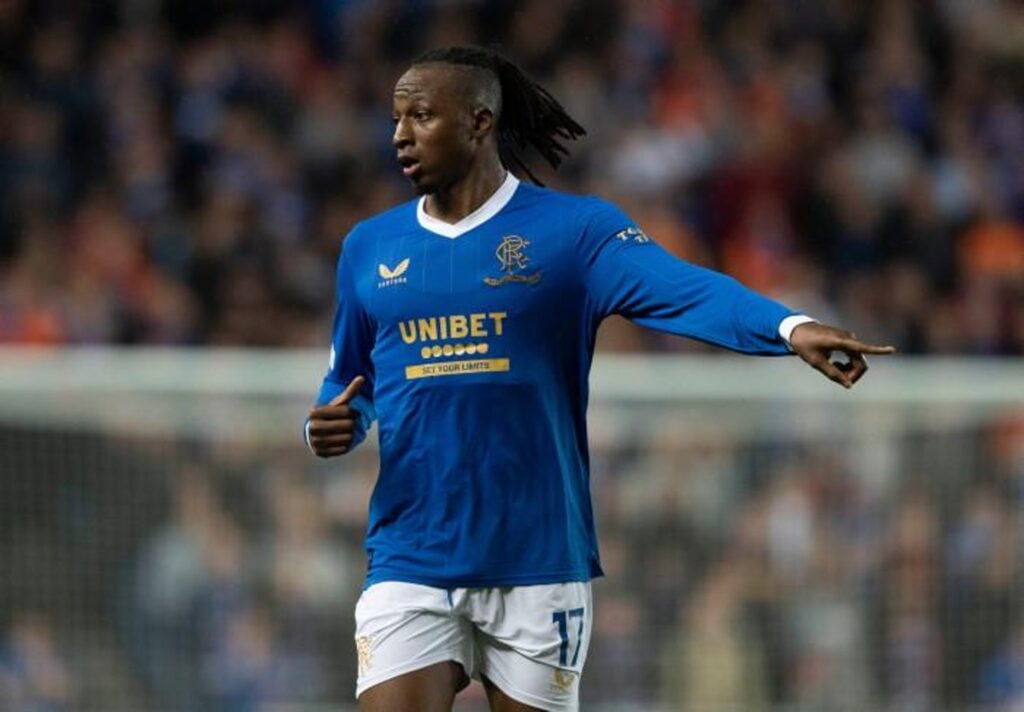