The rush to condemn and criticise on social media after a Rangers draw
or loss is hugely tempting and we’ve all done it. Do we post rational
thoughts with cool heads? Or does the raw emotion take over, does your
mood suffer because your team hasn’t performed?  Sadly, the latter is
true because football is a highly emotional game and, rightly or
wrongly, we’re in deep. Very deep.

Since drawing with St Johnstone on Sunday and after losing yet another
lead, many Rangers fans have questioned whether or not Steven Gerrard is the right man for the job. How many? Too many, far too many.

When Brian from East Kilbride loses his head it’s worth pointing out
the man in charge of our wonderful institution played 500+ games for
Liverpool, earned 114 England caps, won the Champions League and the
UEFA Cup. He also played under managers of some repute in Gerard
Houllier, Rafa Benitez and, whisper it, the current Leicester manager
who has elevated them to the 3rd best team in England behind powerhouses like Liverpool and Man City.

Is Gerrard and his coaching staff immune from criticism? Of course not,
and nor should they be. But let’s look at where we were when Gerrard,
Gary Mac, Michael Beale etc arrived in Glasgow less than two years ago.

Season 2016/17 offered a fair deal of promise with the recruitment of
the classy Niko Krancjar, the battle-hardened Joey Barton and a kid with
great promise in Jordan Rossiter. Although Krancjar had arrived from the apparent tranquillity of MLS, he was a player of genuine quality and
Barton had just won the EFL Championship with Burnley and was named in the Championship team of the year. Rossiter was described by Robbie
Fowler as ‘potentially a young Stevie G’ and we had every right to
be excited by what seemed like 3 quality additions to midfield. We also
signed players with great experience in Clint Hill, Philippe Senderos
and a warrior in Joey Garner, along with the much touted (admittedly by
his father Dean and himself) Josh Windass. Surely this was an upgrade on the Warburton team that started the 2015/16 Scottish championship on fire only to fizzle out towards the end? Unfortunately, the team from
across the city recruited a top coach after getting the fright of their
lives in the 2016 Scottish Cup semi-final and with that came some very
good footballers. We finished 3rd that season, losing 9 league games and conceding 44 league goals to finish 39 points (yes, 39 points) behind
the league winners, and 9 points behind an Aberdeen team managed by the very limited former Ranger Derek McInnes.

Going for 55 never seemed so far away but, as usual, the appointment of
a new manager gave new (but ultimately unfounded) cause for optimism when Pedro Caixanha took charge in the summer of 2017. The signings of internationals like Bruno Alves, Eduardo Herrera, Carlos Pena and Graham Dorrans seemed like decent business and I always thought Ryan Jack was a good player. We had no idea about the likes of Alfredo Morelos, Fabio Cardoso or Dalcio but as football fans optimism is the rock we all cling to. Being knocked out by Progres Niederkorn in the Europa League qualifiers was a huge shock and the season really didn’t get any better than the previous one as the stats were pretty similar but this time round we lost 10 league games and shipped 50 goals. Towards the end of the season we twice lost heavily to our inferior rivals from across the city and the tin lid was put on two disastrous seasons when we shipped 5 goals at Easter Road. Haven’t we come a long way since
having Graeme Murty and Jimmy Nicholl as stand in managers and Russell Martin at centre half?

When rumours surfaced that Gerrard was in the frame to be Rangers
manager it’s fair to say the majority of us were surprised, especially
after the failed Pedro experiment. We all wanted an experienced manager at the helm but after the initial shock I, and many others, were excited at the thought of a world class, footballing icon becoming the manager of Rangers. He demanded the highest of standards as a player and there was no way he’d settle for anything else as a manager. He had a comfortable media job but wanted to feel that buzz on every matchday and he was throwing himself into a huge job. Quietly terrified? Not for one second. Astutely, he assembled a strong backroom staff and standards were raised, significantly, and he took on the onerous task of setting Rangers on the path to once again being Scotland’s premier team.

While season 2018/19 offered much promise but ended without any
silverware, our showings in Europe and two dominant Old Firm wins proved that Gerrard and his staff brought us on leaps and bounds; that is
beyond debate. This season we have qualified from what was essentially a Champions League group and we’ve also won at Parkhead, despite the
efforts of a referee who made, at best, many dubious calls that day. We
dominated Celtic in the League Cup Final only for them to win by virtue
of more dreadful officiating and inspired goalkeeping. We’ve been
refereed to a different standard and this has caused us to drop too many
points. I could list many game changing decisions that have, directly or
indirectly, hampered our quest for 55 but I’d run out of words. What
has the club done about it? Very little, it would seem.

As a support, we’ve always looked at blaming ourselves before going
down the conspiracy theory route and long may that continue. While
it’s only fair that we highlight examples that have had a material
effect on our standing in the table, we also need to look inwardly and
identify areas for advancement. The team has clearly improved on last
season and were very much in a title race until recently. We can discuss
and dissect tactics, systems and formations until we’re blue in the
face but, for me, it all comes down two things; a group of talented
players having the mentality to see games through and the manager using his substitutions more wisely. Rangers players need to have balls of steel and, disappointingly, the fixtures we’ve played since the winter
break would suggest there’s an issue there. While Gerrard needs to
encourage and cajole the squad to squeeze that extra 5% out of them, he also needs to make changes when the dynamics of the game changes. Does he need to change formation from time to time? To this layman the answer is yes but it’s worth bearing in mind he’s only been a manager for 18 months or so and he’ll make many mistakes along the way. His stats at the top of the article also confirm he’s more qualified than me to make those changes!

While we endeavour to find that arbitrary 5% and while Gerrard continues to learn and evolve, it’s important the support doesn’t lose its
collective heads. While we’re desperate to see tangible evidence of
improvement, i.e. silverware, the fanbase needs to catch a breath and
stop falling for the 9IAR/10IAR narrative peddled by their compliant
media. It’s a fallacy, a nonsense; yet seemingly a cause for panic.
Rangers didn’t compete for the top prize for four years so all this
talk of them making history is a smokescreen, a distraction designed to
set alarm bells ringing down Govan way. Remember, when we won 9IAR they were still in the league and the Aberdeen side who ran us close were a decent outfit!! How times change…

We’re in a good place with Ross Wilson as Sporting Director and have
set very strong foundations for future success. Gerrard has a contract
to 2024 and he’s a winner who carried the hopes and dreams of one half
of a footballing mad city so his shoulders are broad enough to cope with
the lunacy that is Scottish football. Yes, we want success right now but
we’ll get there; let’s just calm down to a frenzy, take stock and
trust the great man, his staff and the players he recruits to deliver us
55. It won’t be this season and the disappointment will be crushing
but it’s worth remembering even Brian’s house in East Kilbride
wasn’t built in a day.

When the club hired Gerrard they knew that there was a huge risk-reward.
The risk being he was a rookie manager the reward being his stature in the game which would reflect on the club with commercial and recruitment benefits.

Another aspect about the appointment that as fans we’re all aware of but don’t talk about so much, is the pathway he’s on; 3-4 years at Rangers, showing he can manage a big club with expectations and win things before moving into Klopp’s chair.
Winning trophies however, in a 2 horse race, isn’t that impressive, so he has to win in a certain way i.e. ‘the Liverpool way’ which I think is why he and his staff are hardwired into a 4-3-3 with attacking full backs and two no 10’s – more or less the same way Rodgers played at Celtic which brought a treble treble.
The difference between Rodgers squad & Gerrard’s however is that Rodgers team had a winning mentality, guys who had won things and knew how to win games in the 93rd minute. Love him or hate him that mentality is encapsulated by Scott Brown, and we don’t have anyone near his level of intensity or will to win.

If in some parallel universe Gerrard left at the end of the season and someone like Sean Dyche came to Ibrox, he’d buy a 6ft 4in athletic keeper who comes off his line, McKenna & Cosgrove from Aberdeen, Dykes from Livingstone, he’d play a 4-4-2 with 3 Ryan Jack types and a dead ball specialist in midfield, with Cosgrove & Dykes (or Alfie if we haven’t had to sell him) up top. We would batter teams domestically and probably struggle in Europe.

Due to the pathway I’m not sure Gerrard will change his philosophy and we can’t (and shouldn’t) spend any more money than we’re currently spending so we either need to stick with the project hoping the younger players kick on (Kent, Aribo, Katic, Docherty), whilst improving our recruitment and re-balancing our squad (at one point we had 6 wide players in a team that don’t play with wingers).
Or, we bring in a manager who is more flexible and who’s pathway ends at Rangers not starts with Rangers.

I love Gerrard as a guy, particularly as he ‘gets’ our club and our fans but I’d like to see him adapt by bringing more physicality to the team so we can swat teams like Kilmarnock, Hearts and St Johnstone aside by nullifying their one and only tactic against us which is competing and scrapping for second balls. At present we don’t have good enough players to play through a high press and we are not set up to mix things up and play direct, which results in the type of performances we’ve seen in recent weeks. 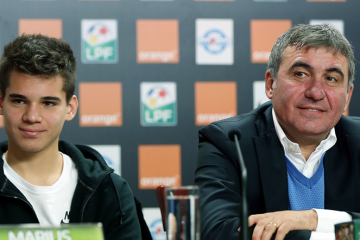 By Jamie Currie. There is no denying Gheorghe Hagi’s standing within the world of football. Hagi is a Romanian football legend. He made 124 appearances for his country from 1983 until 2000, making him the Read more…