Jamie Currie debuts on the site with a tactical analysis of Rangers last game against Kilmarnock.

Rangers are now 10 points behind, with a game in hand. This came after a terrible 2-1 loss against Kilmarnock at Rugby Park. Despite taking the lead through Scott Arfield in the first half, Rangers contrived to lose the match in the second half due to goals from Stephen O’Donnell and Eammon Brophy. In this article, I will take a look at a few of the major tactical talking points that came to the fore during the defeat.

Steven Gerrard chose to go with a 4-2-3-1 shape, with Joe Aribo being the most central of the three players supporting Alfredo Morelos. There has been a recent change from the 4-3-2-1 to this wider formation with the idea to perhaps get the best out of Ryan Kent.

In terms of personnel, Niko Katic came back in to replace George Edmundson as well as Andy Halliday coming in to replace Borna Barisic and Ryan Jack replacing Glen Kamara in midfield.

The image below comes from earlier on in the game and shows Ianis Hagi in possession. Kilmarnock have doubled up on him and are forcing him back towards his own goal – an area of the pitch where he cannot have an impact on the play.

Hagi tries to switch the play and find Ryan Kent, but the ball goes out of play. Instead, Hagi should have fed Ryan Jack and then that would have given Rangers an opportunity to drive at the heart of Kilmarnock potential creating a move in which Joe Aribo gets himself into the space that Alan Power vacates. That doesn’t happen and Rangers have to go again.

In the above example, the eventual outcome leads to Alfredo Morelos being booked for simulation. However, if Ryan Jack uses the red shaded space area, he is able to open the game up, much like with the first example. Hagi can then make the run to the arrow and it allows Kent and Aribo and potentially Morelos to get into the box to try and create a goalscoring chance.

The final aspect of Rangers finding it difficult to break down Kilmarnock’s low block was the lack of progressive passing and link-up play between the front four.

The above image shows that the most frequent progressive passing links came between James Tavernier and Alfredo Morelos. In fact, the 10th came between Ianis Hagi and Morelos. Now, if Joe Aribo, who is supposed to be supporting Morelos hasn’t got a progressive passing link in the top 10 with Alfredo Morelos, then it is clear there is a disconnect between the attacking players.

Despite Rangers having 65.14% of possession and just four shots on target to Kilmarnock’s two, nothing fell in their favour on the night and that’s also with them having a higher expected goals rate than the hosts: 1.14 to Killie’s 0.9.

The above image of the press is the only time during the game where it worked and led to a shot on goal. Joe Aribo vacates his no.10 position to press the full-back and manages to dispossess him and get a cross in, but unfortunately, when it lands to Arfield his shot goes wide.

It was good play for Aribo and helped Rangers further push Kilmarnock back, and it allowed them to pick up the second ball and create a goalscoring chance. The press also allowed Halliday to step inside the pitch, gaining possession; the positioning of Kent and Hagi meant the only ball that was on for the Killie player was the one down the line, which he lost out on to Aribo.

From the good pressing to the lazy – and Ianis Hagi in this instance; Rangers were on the break Aribo does well to press. However, he is a one-man press as Hagi’s position should have been further towards the highlighted circled in order for him to try to close down the space that Stuart Findlay strolls into but Hagi’s poor attempt at joining Aribo in the press allows Kilmarnock to play out of the press easily.

I feel Davis for Aribo should have been the change of personnel in the second half around the hour mark, so we are going to play a little game of hypothetical tactical situations. In this instance, the ball is wide and Jack cannot cut it out. If Davis had been on the park, you’d imagine he would have taken up the position in the red circled area, which would have meant Brophy would have had a tougher time getting his effort away.

The image below gives an indication of where Davis’ position may have been if he had been on the field of play. This would have been easier for Rangers to drop deeper and narrow up against the Kilmarnock attacks rather having Joe Aribo pressing fresh air at that point in the game. It felt like the three-man midfield was needed to help combat Killie’s pressure.

In conclusion, this one 90 minutes in isolation throws up so many questions about Steven Gerrard’s approach, with it being more reactive rather than proactive, the shape of the team in the second half without a third midfielder and the disconnect at the top end of the park. Furthermore, the 2-1 defeat also almost certainly kills the team’s hopes of the title. It’s up to Gerrard and Michael Beale and co. to fix these tactical shortcomings going forward. 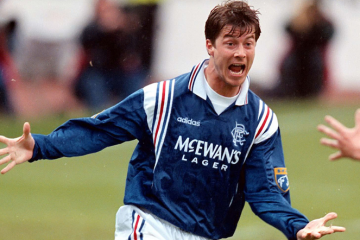 By Ross Hutton The existence of God is one of the most passionately debated topics in human history. There are many people that are adamant and vehemently opposed to the idea of such an almighty Read more…