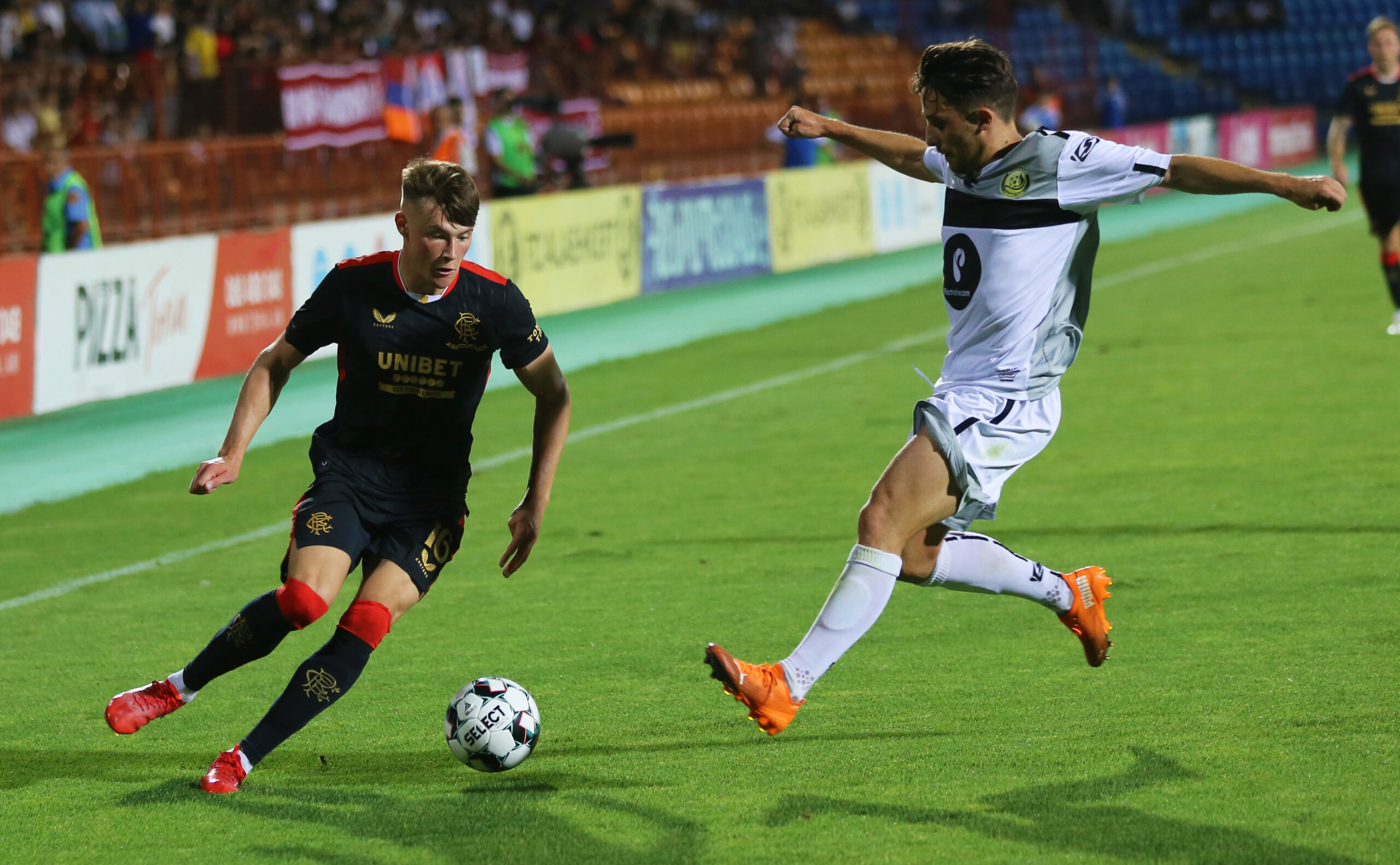 A 3,000 mile journey for our squad who travelled to Armenia to secure their place in the Europa League group stages, although many who would normally make that trip were unable to do so after a number of first team squad players, as well as our manager, did not travel due to a combination of injury, suspension and required isolation. This meant that the team that took to the field at the Stadion Nairi had one or two names that are not so commonly involved. All the same, the line up that Gary McAllister was able to put out was still more than capable of doing the business against Alashkert, so the expectation from the support was that a victory would be the order of the day. However, the match would be another frustrating watch for us, and that use of the word “another” is one that does leave a number of fans rather concerned about where this team is currently at. We were not having to deal with a barrage of pressure from our opponents. They did have a few attacking chances which they were not able to make use of (better teams would punish us, no question) and we even had a man advantage for the majority of the match after their winger decided to leave a foot on our goalkeeper. We, on the other hand, had a whole host of chances to end the tie as a contest yet we seemed to leave our finishing boots with the gaffer. There was a severe lack of composure in front of goal from our attackers, bar one who will be cursing the woodwork as well as some decent shot stopping from their keeper. At the back, we did not look overly composed either and some players who have previously looked so comfortable looked either tired, disinterested or lacking in fitness. And the midfield, whilst showing some decent moments in terms of creativity, still doesn’t look at it’s absolute best. People will want to consider factors such as the lengthy travel, the heat and the circumstances surrounding the squad when reflecting on this, but if this was a total anomaly of a display compared to what else we had witnessed this season then we would absolutely to that into account a lot more. But, we still need to improve, and we are more than capable of doing so.

The following day saw us be drawn in group A alongside Lyon, Sparta Prague and Brondby. For me, this is a very good group to be drawn in, as the travel will be straight forward, the opponents do not feel impossible for us to beat if we produce those European performances we have seen in the previous 3 years of Europa League football under Steven Gerrard and based on current form from them, we should expect to finish in the top 2 and progress. We belong at this level, at the very least, but we will need to play better than what we did here to justify that statement.

Here is how you rated our players after our draw in Yerevan.

Making his first professional appearance for Rangers in such strange circumstances, it was a good opportunity for him to prove himself, and fans were perfectly fine with the idea of him being between the sticks. In the end, there was only one shot that made him work, an effort from distance which McCrorie knelt down to block. Other than that, he was not tested. He was not too affected by the kick from the winger, I doubt that coward would have done the same had it been Allan McGregor in goal mind you. You did, however, notice a difference in terms of Robbie’s use of the ball compared to the usual starters. Distribution is something that may well need to be worked on for him moving forward.

If we are honest, Patterson’s involvement was the only other player that people would have said was a difference from what you would expect a starting 11 to look like. But, having featured as often as he has, there was little issue in starting the young right back. In fact, many within the support have been banging the drum for him to start more often, although this game was a quiet one from him. He did make some forward runs and looked to feed balls into the middle, but there wasn’t really a whole lot of promising moments from him.

Even with a number of players unavailable, you can still rely on Goldson being in the starting line up. It’s been a truly remarkable run of consecutive starts, all of which have never seen him be subbed off at any point either. That said, he did not look totally assured in this game. He looked annoyed at times, whether that was at himself or at others is a separate question, and the main thing I took from him was the needless foul and booking he took in the first half. That was far removed from what we are used to seeing from him. He is still not back to his old self again.

I’m a firm believer that you start Helander any time you can, because when he plays he shows you why he is our best defender. And I think he did that again in this game, he made it look so easy. This myth that he cannot deal with speed needs to be thrown in the bin, he managed their attacking players with no bother at all. Some will suggest that him starting here means he wont on Sunday. I really hope that is not the case.

This was a chance for Borna to produce a display that would merit him regaining his place at left back. The reality is, following that, I think most would see Calvin Bassey as the current first choice left back. His crossing, or lack of it, was so unlike what he should be doing. His defensive work rate feels way off. He is, in my opinion, the biggest culprit of this drop off from the form of the previous campaign. And it’s hard to pinpoint what the primary reason for that is. I’m tempted to give him the benefit of the doubt and say he’s still recovering from his injury. Although, the way he carries himself on the field might suggest that would be too kind on him.

He took on the role of playing as the attacking midfielder in the central trio and I actually thought he did a good job in doing that. He played some very good passes, at the right moments, which a more in form striker would have converted. He also got into the box a few times and, although some would say he should do better, I think he is unlucky with his shot and the angle, as well as the knock on his foot, doesn’t do him any favours. This was encouraging to see that he is producing evidence that, from the start, he can still play this role (and I am fully aware of my scepticism around this in previous games but I think he has once again proven doubters wrong here) but we still need another player to come in to play that role I think.

The more important thing was to make sure that he was going to be ready for Sunday, his role is vital for us to play at our best. Against Alashkert, it is perfectly reasonable for him to play in first gear and still do what is required. So, nothing spectacular, nothing that was game changing, but he was on the field and he didn’t make too many errors. Fine, move on.

His first European appearance of the season and, much like Davis, it was a case of him playing 90 minutes without causing a huge amount of fuss as he will be important for the Old Firm clash. In and out without any dramas, we would have all taken that pre match.

I was confident that Hagi would put on another show for us but in the end he looked one of the most frustrated on the field and his subbing off just after the hour mark was a perfectly justifiable decision. There was a free kick in the first half that was…just weird. It was laid off to him and the following cross was like a rugby kick. Here’s hoping that this is the bad performance out of the way, it was so different compared to the first leg which is so odd.

He should have walked off the field with the match ball. To have not scored any of the chances that he had was madness. Decision making, whether it be to not try and shimmy past the keeper in the first half, or trying a volley over a much easier header in the second half, it was a confusing display from him.

Can totally see why he, again, is the best player from this game according to your votes. He looked the most likely to score, he had a chance in the first half which the keeper tipped onto the post. A really good save from a really clever shot. In the second half, with the game winding down, he had an effort from 20 yards out which was denied by the crossbar. Apart from the fact he didn’t convert here, you look at the fact he has been more advanced the last couple of games and looked so much better, I really hope that is taken into consideration by the management team.

He has scored goals having come off the bench in the past, it’s perfectly reasonable to expect he could do the same here. But by that stage our attacking play had slowed down a lot and we ended up going into time wasting mode.

29 Feb 2020
question_answer0
Welcome back to ‘The Road to Rangers’, the series written by Ross Hutton where we take a deep dive into…