As far as a football contest was concerned, this was pretty poor game. It feels even poorer from a Rangers point of view having surrendered our lead at the top of the table, even though we are now only behind on goals scored. Speaking of which, two goals were scored in this game, a poor opener from our perspective but an equaliser, taking advantage of poor set piece defending, meant that there was the expectation we would push on in the second half. The second half offered practically nothing, other than a welcome return to action for Ryan Kent, and the draw was a fair result.


Allan McGregor – 6
Didn’t have much to do in the game, and he isn’t necessarily at fault for the goal. However, the way he speaks to referees when he feels wronged, the initially funny, is now beginning to look a bit too much and he needs to reign that in before a ref finds enough of an excuse to send him off.

James Tavernier – 4
What to say about Tav that hasn’t already been said in relation to this game. It was very bad, not only the error, which of course exacerbates his crap day, but his overall contribution at both ends of the park. It’s a total brain fart for the goal. He seems to make his life so much harder than is necessary by trying to head the ball at a most difficult angle, which causes the most ridiculous bit of difficulty for our whole defence and Hearts take advantage. Time after time he crossed the ball into the area with only one man to aim for, asking way too much, and he just looked like a man who was shaken from his mistake and could not snap out of it. Whether it be tough love or an arm round the shoulder, he needs something to support him now as he is not performing well enough.

Connor Goldson – 5
Not only did he look to have a difficult time dealing with their front line, he also had a poor day when it came to moving the ball around. His passing is normally better than what it was, didn’t notice anything of great value from Goldson in this game.

Nikola Katic – 5
Katic would have been selected with the thought process of “he is best placed to deal with the physical presence of Ikpeazu.” Niko, sadly, did not win that battle at all. Some criticism can be thrown his way for not dealing with the aerial ball in the build up to the Hearts goal, but in fairness he does contribute to the equaliser, even if it wasn’t an intentional bit of play.

Borna Barisic – 7 – Man of the Match
Looked very comfortable at Tynecastle. No defensive issues to speak of from him, had a lot more fight than some of his peers and he played the occasion in a manner that we would expect. And, what’s great to see, we are expecting this more often than not now from him. Compare his crossing to Tav’s. He did not simply whip the ball in for the sake of it. He would look for better options that meant keeping the ball more.

Glen Kamara – 6
Had a good spell where he would collect the ball in the middle and drive forward, but we are still not seeing the passing game that we need from him. His season, like many others in the side, really hasn’t properly started yet. And considering we are coming toward the end of October, that’s quite damning.

Steven Davis – 6
I think it’s little coincidence that Rangers did not play well here when Steven Davis was a lot quieter than he has normally been of late. There wasn’t the same drive, it all felt a bit laboured here, and although he would need his teammates to step up and help him in these situations, it still seems a bit out of character. I would say however that his second half was better than his first.

Joe Aribo – 7
There were flashes of promise and skill, and this would be the ideal kind of game for him to step up and be the catalyst, but he wasn’t consistent enough to stand out I thought. A lot of this can be looked at as a formation issue. Is he being asked to track back too much and, as a result, is not able to perform that “Number 10” role that we can all see as being ideal for him? The more he can be pushed up the park, the better chance we have of attacking success.

Scott Arfield – 5
As always, you cannot fault the effort of Scott Arfield. You can see the intelligence of his football brain in his play a lot of the time. But that’s no use when his legs are simply not there. He arrived back in Scotland off the back of an excellent shift for Canada. Good for him, but not good for us, as he clearly was not fully fit. You can level some blame at the management team for continually picking him when he obviously could do with extra recovery time, but it’s games like this that make many Rangers fans think that he needs to now seriously consider whether continuing to play for Canada, with all the travel that involves, is really something he should be doing at this stage of his Rangers career.

Alfredo Morelos – 7
Despite getting no service from his wide players, Alfie still managed to make life difficult for the Hearts defence. His goal is underrated when you consider the amount of bodies around both him and the goal line, it’s a smart and calm finish. As time went on you could see the frustration building up at the fact that he was having to work so hard to try and make something happen, whilst his attacking companions simply couldn’t.

Sheyi Ojo – 5
I honestly don’t remember Ojo doing anything. In fact, that’s not true, he did play a bad pass in the area which lost possession for us when we had quite a good attacking opportunity. But other than that, I remember nothing about his day. That’s a sad indictment and, like Arfield, he now needs to be taken out of the side for a few games so that we can look at other options.

Ryan Kent – 6
Great to see him back playing, and his inclusion in the game saw a bit more sharpness from the wide area, but the game had stooped into such a lull by that point that it was always going to be tough to really do anything game changing.

Greg Stewart – 6
Not quite as sharp nor as memorable as Kent, but he is a player who you would consider as an ideal option to come in for Arfield from the start more often, as we know just how effective he can be when he is on it.

Jermain Defoe – 6
Don’t remember much of his contribution during his limited time on the field, even though I felt it was all set up for him to be the match winner. 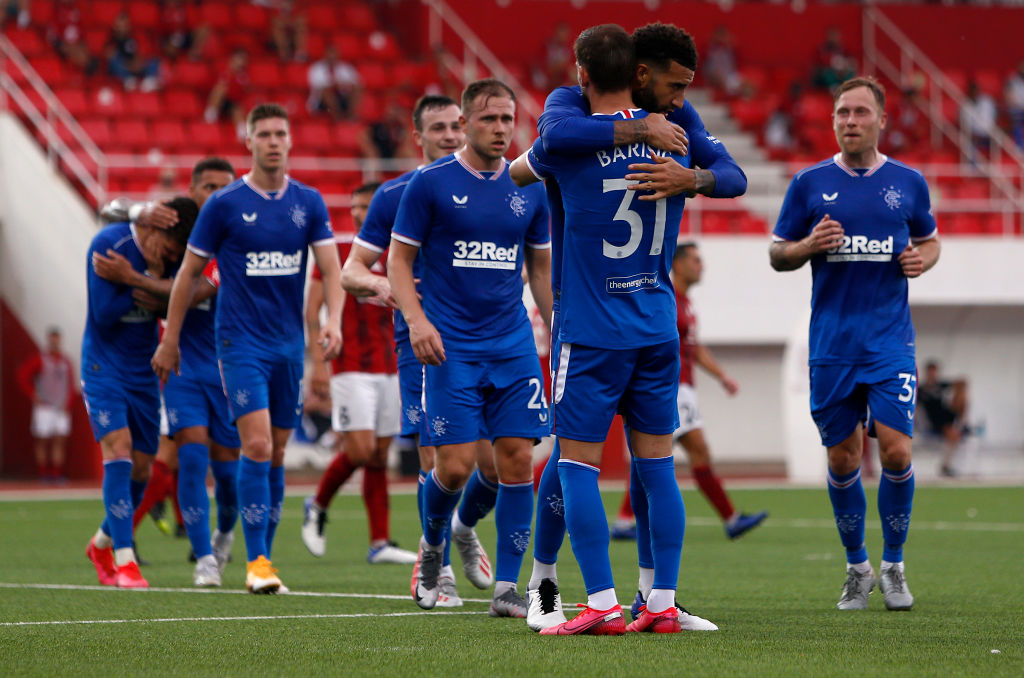 September 18, 2020
Rangers began their Europa League campaign in Gibraltar for a second season in a row, this time a one-off tie…

November 12, 2019
question_answer0
Rangers travelled to Denmark for the first leg of our third round Europa League qualifier, a game that many people…