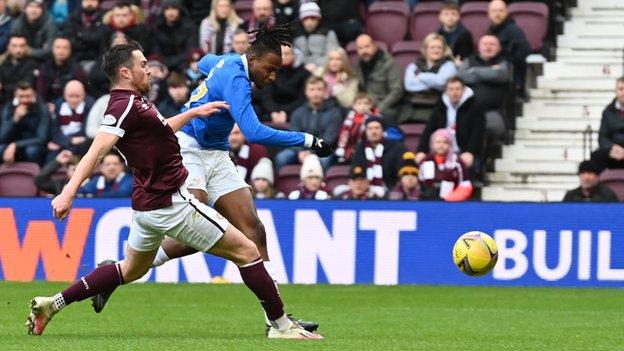 As Giovanni van Bronckhorst looked to continue to his run of wins in the league following his arrival, Rangers travelled to Tynecastle in what so many fans viewed as one of the toughest games our team would have this season. Hearts have been strong on their return to the top flight, with Robbie Neilson’s side playing a system that really suits the key players in the team. That stadium is always one that is harder than most for an away side with the crowd being right on top of you, and with a reduced away capacity from normal, the atmosphere was going to be a really interesting one for our players. Hearts started the game in that spirit, an early chance to take the lead foiled by our keeper. After the initial pressure from the home side, we got ourselves going, and our very attacking forward line made a real difference with a ball cut inside to our striker who was able to side foot the ball in to give us an early advantage. Not long afterward, we would get our second, courtesy of a long ball over the top from our centre back which was perfectly brought down and finished by our attacking midfielder who continues to consistently impress. This was a goal that we had threatened to score in previous games, but the execution of this one was simply perfect, and the early momentum that Hearts tried to build up was quashed. For the rest of the first half, Hearts did try to find a goal back but despite having some joy against our defence, they were having no joy against our goalkeeper.

The second half again was one where we had to keep the Edinburgh sides attack at bay, without having a huge amount of chances of our own. On the odd occasion where we did have an opportunity to increase our lead, their goalkeeper showed why many talk about him as being the best in the league, although the display from his opposite number one would suggest otherwise. A combination of good saves and not taking their chances would continue to frustrate Hearts, which would then boil over with one of their players, already on a booking, getting sent off for deciding to get involved in a dust up that was really all to do about nothing until he got involved. That was the moment we could feel completely safe about the three points travelling back along the M8 to Ibrox, and the way the management used our subs to just secure the tie was really sensible. The fantastic start from Gio and co continues, and with games coming thick and fast for us at the moment, now is the time to get these wins on the board.

Here is how you rated our players from another away win in the capital.

Rumours of his decline were greatly exaggerated, and I feel that is not the first time that I have paraphrased Mark Twain when talking about Allan McGregor. He has really made himself indispensable for us again, with his save in the opening moments of this game an example of his importance, tipping the ball over the bar after the attempted lob. For him to have kept a clean sheet in this game despite the number of chances Hearts created was amazing from him, and his award of Man of the Match here is richly deserved.

We are noticing a real change in the playing style of Tav, and the job for the full back is to be a defender first and foremost. He is attacking far far less than before, but in a game like this that means we are less exposed to a counter attack and it makes total sense in a match like this. That said, he had a tougher time, as did the whole defence, in dealing with the attacks thrown at him than he has previously. Still, it’s a clean sheet and a positive run of games with him adapting to the new instructions given to him.

In France, Goldson played a long ball over the top for Aribo to run on to, and it would have been such a good goal if Joe was able to bring the ball down as he had wanted to, as difficult a skill as that is. It was great that we tried this again and this time it paid off, so much credit to Aribo, but the ball from Goldson deserves to be talked about highly as well. When he gets it right, it’s a really good weapon to use, especially against a team that are not going to sit back. That vision is important to utilise, I trust Connor now in terms of making correct decisions.

This will go down as a game that will be a good lesson for Bassey as a centre back. He did have a much tougher time up against an experienced forward in Liam Boyce, who was finding joy in turning on the shoulder of Calvin. Boyce was unable to capitalise on that due to his finishing and a strong keeper, but what Bassey needs to do from this is think about how to handle a forward who is playing much closer to him. And you have to say that getting that lesson so early on, and for it to not matter in terms of the result, is a really good thing.

It’s really encouraging that Borna continues to do well in defence when we consider his attacking attributes to be what stand out more in his game. I think he performs better at the back out of the two full backs, and I think that he is showing a grit that was lacking at points from him this season. He feels like a very reliable player for us right now, a credit to him that it feels too difficult to take him out of the starting line up right now.

A tough ask in this game to ask him to be the only anchor but in the end I think he does a good job. He wins a lot of fouls through getting to the ball first, and he found himself in the right places a lot of the time to do that spoiler job well. Whether he finds himself starting every game over the next few will be interesting to see, it requires a lot of energy to carry that on game in game out.

The only word you can say for him right now is “WOW!” He has been superb for us lately, and his goal here was simply sensational from him. The ball over the top is great and he times the run perfectly to be right under the ball as it comes down. It still requires the control to be spot on and the touch to bring it down is sensational, and sets him up perfectly to fire across goal past Gordon to put us two up. He is such a threat up top right now, and his work rate coming back is also impressive. A vital player for Rangers right now.

We could have gone further ahead in the second half had Arfield converted a chance you would fully expect him to put away. It shows the intent that the manager had for this game that he decided to go with Scott in the middle, a much more attacking option, rather than a Davis or Lundstram to try and contain more. He trusts Arfield enough to do all sides of the game, and bar the lack of finishing in the box, he did a lot of really important work in the midfield that helped us get the win.

I’m sure like so many others, you were shouting for Sakala to play the ball back to Morelos first time, but he decided to hold the ball and bring it forward in the box a bit more, before playing it back to Alfredo who finished first time. It’s a good job that Fashion has a lot more composure than most of us would have in that same situation, and his overall speed gave the Hearts back line a real headache.

Another goal for Morelos and that was a cool finish first time in the box. We know he can score these kind of chances but at points this season his finishing looked below the level we expect of our main striker. But he looks like a player who is enjoying his football right now and seems to be learning more and more, and if he can continue to lead the line well then the timing of this return to form could be perfect.

So much praise for the other forwards when talking about the opening goal, but the ball in from the left from Kent was also a really good cross, and the whole front line deserves credit for the opener. The decision to play Kent and Sakala alongside Morelos was a superb sign of intent from Gio, and all of them played their part across the match to secure the victory.

On late on to help provide some extra energy when tracking back at a point where Hearts were doing all they could to get back into the game.

Once again coming on to provide that extra bite at the back and be a spoiler. 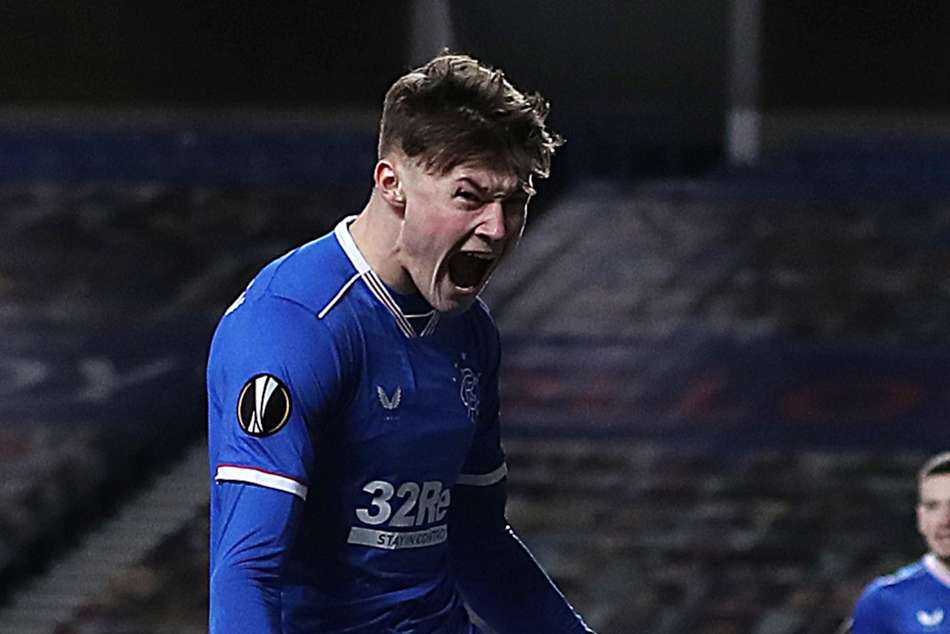 Player ratings from our second 7 goal thriller against Antwerp.

Player ratings from our first draw of the season.