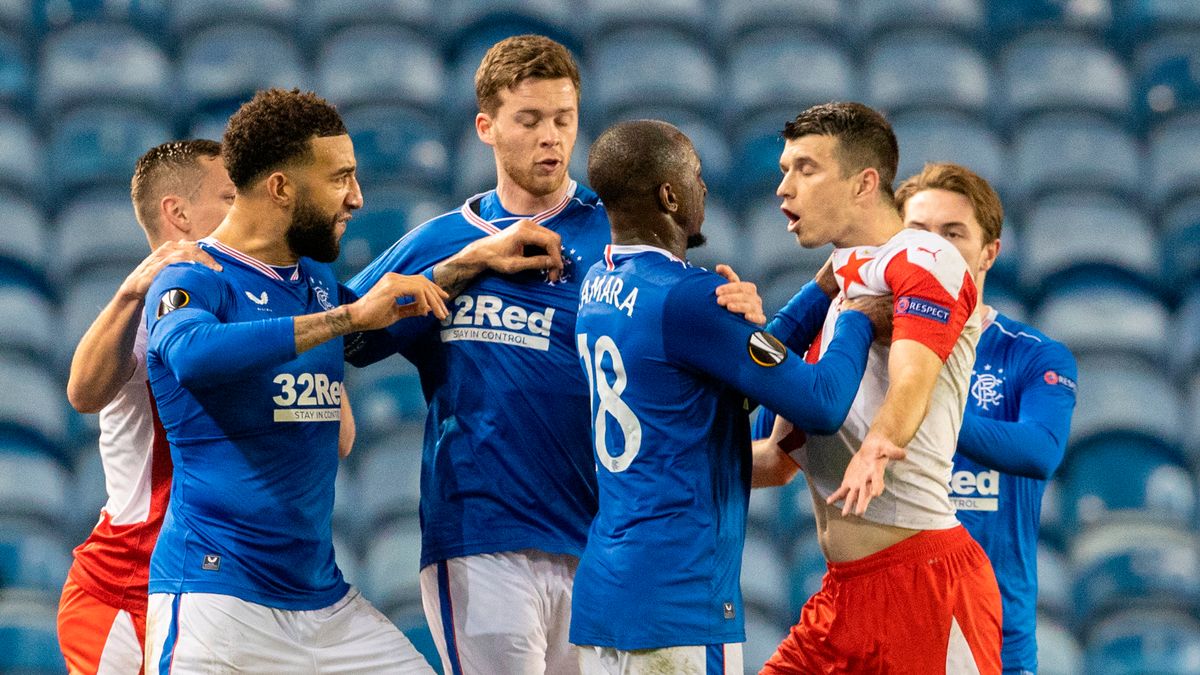 Rangers exited the Europa League at the Round of 16 stage for the second year on the trot, after being knocked out in our first home defeat of the entire season against Slavia Prague. A game where people will not remember any of the football so let’s quickly discuss the key sporting moments before discussing the other issues. Slavia took the lead with a well worked goal with a cross from the left headed in by Olayinka. Despite starting better than we did last week, we could not find that equalising goal before half time and were lucky not to have conceded a penalty before it. The opening stages of the second half ended with a horrific challenge from Roofe which left the Slavia goalkeeper in a terrible state. A red card the correct decision, but it must be pointed out no malicious intent was on Kemar’s mind, this was a total accident that he got badly wrong. Thankfully their goalkeeper looks as though he will be ok if for some war wounds from the incident. The game really began to get away from us as Leon Balogun was also sent off for a second bookable offence (which seemed to be coming) and from the resulting free kick Stanciu (the outstanding player of the tie) scored to put any hopes of Rangers coming back beyond us. Claims of heavy handedness from our players are odd and can easily be countered with their players being very vocal in feigning of injuries. That is a tit for tat that no one will back down on however so there is no need to go over that any more. What happened toward the end of the game was a sickening event. After the referee (who I have to say had zero control over this match and was one of the worst referee’s we have had in Europe under Steven Gerrard) gave yet another free kick to Slavia, Kudela walked up to Glen Kamara and whispered something in his ear. The immediate reaction from him and his teammates close by suggested a very serious insult had just been said to the midfielder. Given two of the Slavia players who were closest to the incident did not immediately run to defend their teammate when the fracas started tells you a lot about the validity of Kamara’s claims that Kudela made a racist slur toward him, something that Bongani Zungu confirmed to the referee. At this point, football was no longer on the minds of any Rangers fan. The game ended, but the story certainly hasn’t. In the following days, Slavia Prague have made a number of claims of their player being assaulted in the tunnel afterward, that they needed a police escort to exit the stadium due to a number of fans being at the ground to intimidate them, that they had filed a police report on the matter. Every single one of these claims has been rubbished by cold hard facts, and their claim that Kamara was the player who had attacked Kudela just goes to show how utterly despicable the club acted in this regard. They have since come out and stated they are very anti racism and denounced a picture of Ultras holding up a banner with a racist slogan to our player, and seem to have said they do not condone the messages Kemar Roofe received online afterward. I can only tell you my experience of the last couple of days and many will be different. There have been plenty of people who have immediately leapt to the defence of Kudela, which is a natural instinct for them rather than looking at the scenario and seeing it is extremely likely the claims of Glen Kamara are absolutely correct. These “people” are part of the problem that we still have in society today, and I am grateful for the fact that so many more have come out in support of our players who have been abused in this manner since (fans of Slavia Prague among them). What happens now, it feels horribly inevitable. We do not foresee UEFA actually doing something this time and will instead find a way to look like they are doing something when in fact it does not go anywhere near enough. And that allows more scumbags like Kudela to act in this manner knowing they will not be punished for it. Until that changes, until “people” like this begin to fear the consequences of acting this way, then you will have many more scenarios like Thursday night.

Forgive me for not analysing specific player performances, but something far more important needs to be raised this time.

Here is how you rated our players from our final Europa League match of the season.

It needs proper leadership to tackle the problem.

It requires grown up discussions about how to solve the problem.

We need to believe we can solve it. We cannot let racism walk free yet again.

It needs clubs to be firm with players and fans on the matter.

It needs organising bodies to set out clear rules and instructions.

No player should suffer this kind of abuse.

No player should worry about suffering it on the field or on social media.

The media need to be stronger in speaking out against racism.

People should not feel they should hide behind anything when the subject is brought up.

There is no excuse for receiving any form of racist insults.

Until these changes happen.

Until these incidents can be called out and they are firmly dealt with.

And no one wants to see football reduced to that.

7 Feb 2020
question_answer0
Rangers Women’s side are making their final preparations for the new season, which kicks off this Sunday. Rangers host Queen’s…

23 Nov 2019
question_answer0
An excellent afternoon of football at Ibrox as Rangers well and truly sent Aberdeen back north with their tails firmly…
Menu
This website uses cookies to improve your experience. If you continue to use this site, you agree with it.
Ok