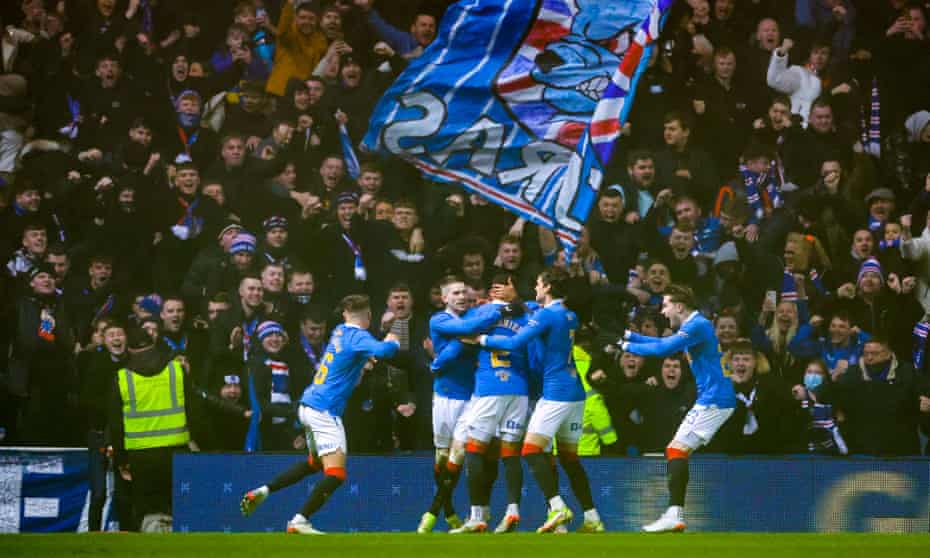 The fog descended on Scotland but thankfully this did not prevent our match against Dundee United going ahead. For the first time in a long time, away fans from The Arabs arrived in Glasgow and were in loud voice, having been the only team in Scotland so far to have won a game against Rangers this season. A lot has changed since that match at Tannadice, and our fans went into this game confident of victory, not only because of the number of players missing for Tom Courts’ side due to Covid, but our league form since the arrival of Giovanni van Bronckhorst has been perfect, and we feel as though this is a team that can do the necessaries in matches like this to secure victory. What we did not expect was an incredibly frustrating game with only a second half penalty being the decider for us.

An annoying watch began with the ends being switched for where we would be attacking first half, which is always a bug bear of so many of us, and things did not much improve thereafter. It took the side fifteen minutes to register their first attempt at goal, which would be followed by a few chances over the course of the first half, albeit nowhere near as many as what was created in the match against St Johnstone for instance. Dundee United set up well to frustrate us, but even so we should have done far better than what we did and the shape of the side looked very wrong. This was amended in the second half with a half time change which put more of an attacking emphasis on the side. We continued to look to create chances, and eventually that pressure paid off as we were awarded a penalty for handball in the box, a clearer penalty you would not find across the country that weekend. The penalty was converted by our captain, and the celebrations both on the pitch and in the stands were more out of frustrated relief than anything else. We needed to remain focussed and still try to find that second. When it was clear that was not going to happen, we had to manage the game smart and see out the win. We so nearly failed to even do that, as a header from them would hit the crossbar in what would be the final moment of the match. It was a win, yet another on this run of victories in the league, but the manner in which we did so was depressing in a lot of ways. What is also depressing is the fact that as a write this there is a new sanction on football fans going to stadiums in Scotland, resulting in the winter break being brought forward for the benefit of a lot of clubs, for differing reasons. Hopefully this is not something that lasts beyond the 3 weeks initially stated.

Right at the start of the game, Dundee United had a shot, from former Ranger Nicky Clark, which McGregor saved. Apart from that, his only real contributing moment was watching the header from Watson loop over his head but hit the crossbar. It was the kind of game where that is all you can really say for him as so much of the focus lies further up the park.

Of late, Kemar Roofe has been taking the penalties but in his absence, our captain stepped up and did what he has so often done for us and convert from the spot. His record of penalties is really good, and many were surprised to see him knocked from that spot, but a long awaited return to finding the net for the skipper whose celebration said so much about how he felt the game had gone.

A fair amount of blame would have fallen on Goldson had that last second chance for Dundee United found the back of the net. To allow the ball to bounce in the box like that and not deal with it as the senior defender in the side, it would have been unforgiveable had we lost that goal.

I think his rating is possibly a symptom of fans just being deeply unimpressed with the entire team, as I don’t think he does a whole lot that’s as bad as others around him. That said, he could also have been heavily criticised if the last gasp opportunity had gone in.

At the start of the game, Patterson found himself at right back, with Bassey moving from centre back to left back and a central defensive duo of Goldson and Tavernier. It seemed really strange to see this change very quickly and for Patterson to then move to left and the rest of the players moving along one. Whether this was for the benefit of the remaining players are not, I have no idea, but in any case Patterson played like a right back playing at left back. Not awful, but not as assured as he has been before.

It seems fair to say that Lundstram does not feel like a Gio type of player. Coming into the team from the start with the idea of keeping Joe Aribo out of the starting line up to prevent him getting a booking, Lundstram played in the deeper role in the first half but what is clear is we need that type of player to offer a lot more going forward than what he can do. Him coming off at half time was down to the game plan needing to change and he is very expendable in that situation. I do not anticipate that we will see much more of him at Rangers if you were to ask me.

In a game that you are going to control a lot of the ball and do near all of the attacking, it is unnecessary to play both Lundstram and Kamara in the same line up. Kamara ended up playing higher in the first half, closer to his role previously, but this did not work as I think he is now set as a 6 as opposed to an 8. He was then moved back into this deeper role in the second half and this worked a lot better.

When the stadium announcer proclaimed that the sponsors man of the match was Hagi, the reaction to this from the stands was one I have never heard from a stadium before. The bafflement mixed with laughter was so telling, and summed up his day. He rarely put a foot right, giving the ball away far too often, failing to play the right passes. And the manner in which he gave up the ball so late on when he should have kept the ball in the corner, it was baffling. There will be questions asked about his long term future here if that’s the level he is at.

You would think that he would take on the responsibility of being the main attacking outlet and relish it, but I feel that he is now at the point where he requires a rest as the influence he brings on games has weaned over the past few matches. He puts so much energy into matches that it is understandable given his age that he will dip after a few run outs when playing a full 90 minutes. Given the fact we are about to have an extended break sooner than expected, that could play into his favour from a personal perspective.

I feel that Kent was our biggest attacking threat in the game, much in the same way as he was in the previous match, but things were not coming off for him as much which was a frustration. I do still think that he is playing much better in his new role and is absolutely one of our most important players right now, so in no way should his involvement in matches change in any way.

A frustrating afternoon in front of goal as he was unable to continue his recent form up top, but in no way does this game reflect on his up turn in form. I think he is doing the right things far more often, and will certainly benefit more by continuing to focus on being in the box more regularly than before.

It was clear from the tepid first 45 minutes that what we needed from our team was more pace, and Scott Wright absolutely delivered that. His inclusion and the way we changed our shape really helped matters, and the cross from the right that results in the penalty is the beneficiary of reverting back to what works better.

It is somewhat embarrassing that against a depleted Dundee United side, we had to resort to bringing on our best player in a game we wanted to rest him in. The manager was right to make this call as we were still chasing the game. Thankfully during his time on the park, he did not receive a booking.

12 Nov 2019
question_answer0
It is important to reflect on the individual performances of our team, win, lose or draw. Up to now, I…

12 Nov 2019
question_answer0
It’s tricky to be so analytical over a game that was basically done after two minutes, but there have been…
Menu
This website uses cookies to improve your experience. If you continue to use this site, you agree with it.
Ok