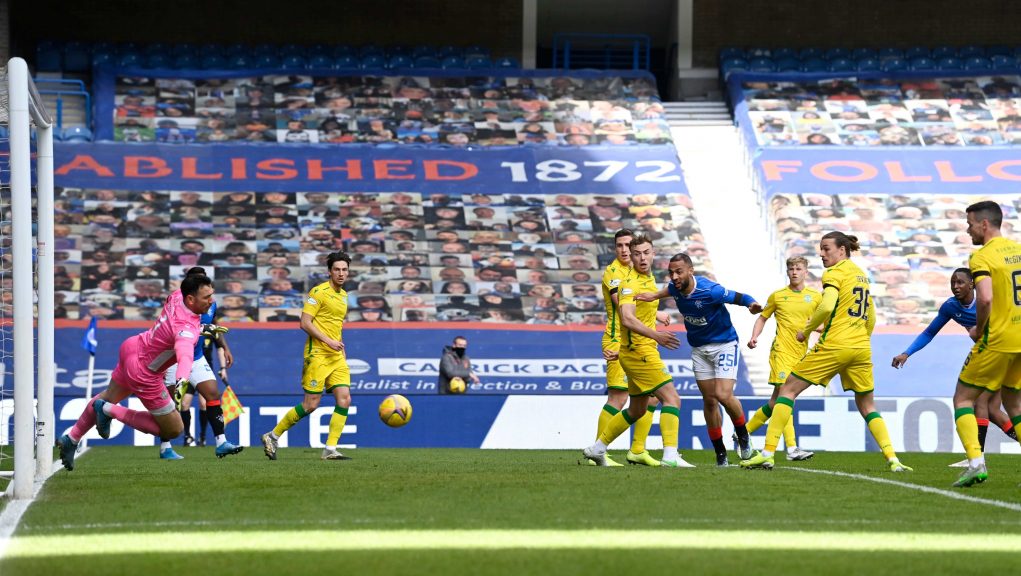 Rangers began our post-split fixtures for this 55th title winning season with a match against Hibernian at Ibrox, an opponent who have made us work for our wins against them this season. This game was no exception to that, and it was not surprising that the scoreline was a tight one, nor was it surprising that it was our team who once again came out on top. In a game that was akin to the weather we have been…”enjoying” the past week, there were flurries of some excellent pieces of play from our side mixed in with spells that we have not been as used to this season where we really struggled, in particular down our left hand side. The game started with Rangers looking to set the early tempo and moving the ball around quite well, and creating some decent opportunities. We were unfortunate not to go ahead when a ball that was knocked across was tapped in, only for it to be correctly called for offside. Hibs did not see this as a wake up call thankfully, and we then took the lead when a number of players tried to convert in the box and we eventually managed this with a sweet half volley that curled in. From this point, Jack Ross’ side then started to cause us some problems and were looking to make a lot of attacks down their right hand side, and they were getting a lot of joy from this. A couple of shots from the right hand edge of the area that could not be converted, and our opponents maintained a level of pressure for the rest of the half.

Half time came at the right point for us, we regrouped and were able to try putting in solid attacks and this paid off in the end with a superb piece of skill from our talismanic attacker who put us two ahead with a magnificent edge of the box strike. Getting this second goal was crucial as we struggled to create a whole lot more after this and Hibernian started to increase the pressure even more. Their game plan was very clear, expose what was a struggling left hand side of ours, and this eventually paid off for them as we conceded at home in the league for only the third time this season, a cross from the right headed in with the attacker having loads of space to set himself to knock the ball past our keeper. The rest of the game was tense (as tense as it could be given we have already secured the league title of course) but we saw at the game and claimed another three points as we move closer to an incredible points tally for the season. The focus will now turn to the Old Firm cup clash next weekend, and hopefully the team will have learned the right lessons from this game to get ourselves right for this tie.

Here is how you rated our players from the afternoons victory over Hibs.

We know that Allan McGregor will be very disappointed in conceding a goal and not add to his clean sheet tally for the season. All the same, he made a few important saves that helped make the points total 3 instead of 1. The desire he shows (which more often than not manifests itself in a lot of moans) is as clear a piece of evidence as you could ask for that him staying for another year is absolutely the right thing for us.

I continue to get really excited by what Nathan Patterson can do for us in years to come. This was another really solid full back display, he is playing like someone who has been in the first team for years and he deserves all the praise afforded to him for not only his defensive solidity but also his willingness to get forward and be a goalscoring influence. One of the more impressive Hibs players this season is Josh Doig, the young left wing back who is younger than Patterson, and someone many Rangers fans would happily see make the journey across the central belt to play for us. He got no joy from Nathan in this game, and that is big credit to Patterson for that.

All season we have talked about the brilliant consistency of Goldson, both in terms of being on the pitch all the time and also the performance level being so high. For once, I fear I need to raise something that is perhaps a small issue regarding him. The Hibs goal, although it is a well taken header, the space that he is afforded is a worry and I don’t think it is unfair to ask the question of Connor in this situation. Of course, he more than makes up for this with so many other great attributes, but given it’s not the first time this has been seen, it is worth noting at the very least.

Picked as the sponsors man of the match, I wonder if this is down to the fact that Hibs attacked our left hand side so much and they were not able to capitalise more because Fil was holding firm as well as he was. It’s a very understandable reason, absolutely, and it shows the benefit of having a quality centre back in your defence. A lot of headers won from set piece scenarios, a lot of clearances, a very important contribution. And another couple of examples of him chasing down balls that is proof he is not “slow”.

This was the toughest game that Borna has had for us in a while. Hibs were trying to exploit the space in the right hand side and use the speed of Boyle to our detriment. Borna does not have the speed to keep up with a fast attacker like that, so he needs to be more disciplined with his positioning when that is the case. He was not quick enough to react to the danger that led to the Hibs goal. Thankfully, the result was not affected, but we can only hope this is his bad performance out the way and he can push on from here. The last time this happened, he did react well.

Aribo’s inclusion was an interesting one for me. I felt this game would be a good dress rehearsal for the cup tie, and I was not convinced that he would have been a choice to play against Celtic given his performances against them this year. But, this was a chance for Aribo to prove his worth and in many respects I think he took it. Of course, the goal helps hugely with that, letting the ball drop as he set himself to curl the ball into the net on the volley. I thought he also showed more desire which is what is needed for Old Firm games. If Aribo was to start, I would be ok with it now, but only if he is in the attacking trio if I am honest.

We got the usual from Davis if slightly subdued which perhaps goes a long way to explaining how the team as a whole struggled to consistently keep their tempo. All the same, when we did put the pressure on Hibs, Davis did play his part in this as he tends to do in matches, but perhaps the reason this was not so present throughout was because of what we know is upcoming.

Like Davis, this was not as standout a day for Glen which perhaps can be a bit more surprising as this felt like a game where you can get the benefit of his usual midfield work. He lost a lot more duels for the ball than what he normally does which raised eyebrows, and we didn’t get to see any special moments of dribbling on the ball that you can often get from him. A good Kamara performance will be important next weekend, no question.

Another start after a good performance against Cove Rangers but there was not the same goal output nor the same high performance level as before, which perhaps brings into question his inclusion from the start against Celtic in the cup. He did quite well in terms of his passing game, but not enough in the way of shots which is what he would be in the team for. Whether both he and Morelos can play in the same side is an interesting question as well.

Also a quiet day from our main striker and that is likely the only crumb of comfort that Hibs fans will cling onto because apparently that’s all they seem to aspire to. He looked disappointed in coming off when he did but it really was no great surprise, difficult to point to anything in particular that was great from him.

Games that feel like more of a grind like this did are won thanks to special individual moments, and we got one from Ryan Kent here with a superb goal. Up to this point, there were concerns about both his overall output and also his lack of tracking back to help with the defensive issue. But, collecting the ball outside the box, he cuts in before smashing the ball with his left foot into the net. A lovely moment of skill and determination to give us that second goal, a goal that would prove crucial in the end.

I feel that Arfield should be starting next weekend, with his energy in the middle of the park he can help win that crucial midfield battle, so having him on the bench and getting a small run out is a perfectly smart move I think.

No big moments for him off the bench, but again when you ask the question of whether he would be a starter next weekend, the question is whether we feel our key to success would be through intricate play. If that is the case, it would be a toss up between Aribo and Hagi.

On very late to help see out the game, which we did, so yay!

Also on very late to help see out the game, so also yay! 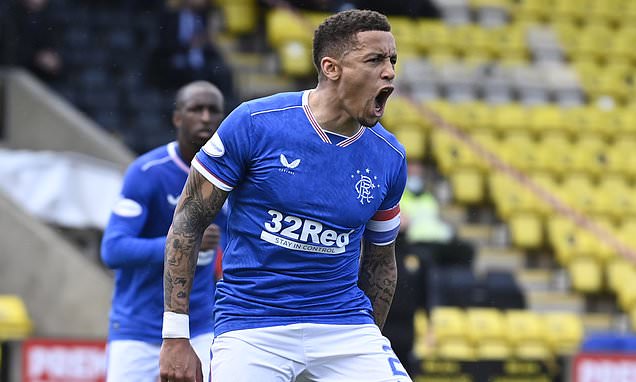 Player ratings from our penultimate game of our 55th title winning season.

10 Feb 2020
question_answer0
Time was ticking down at Ibrox on Wednesday night. New Rangers signing Ianis Hagi had been enjoying a fine full… 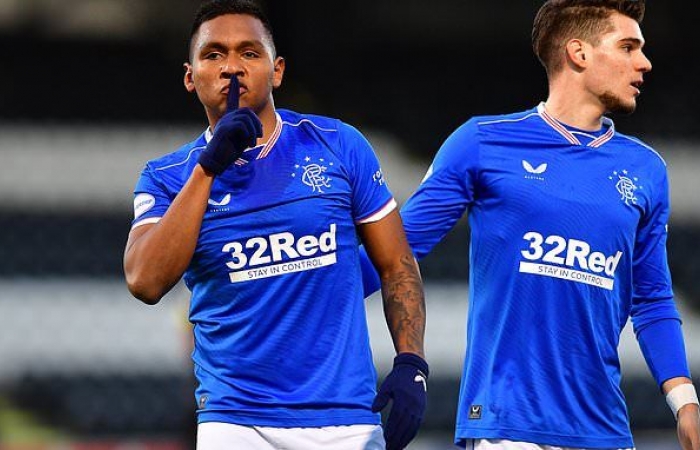 Player ratings from our win over St Mirren