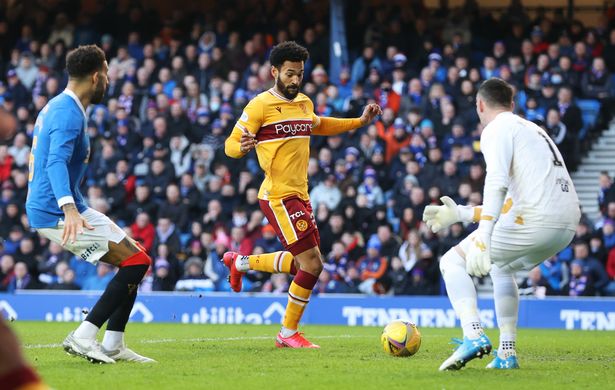 Austin Benson rates our players from a disappointing result at home to Motherwell despite being 2 up at half time.

Allan McGregor – 3.9 (4)
In the first half, McGregor didn’t have much to do, however, it was his second half display which sees his
rating so low. Conceding the first goal following a defensive mix-up a quick break down the wing from
Woolery who teed it up for Jordan Roberts to tap-in past a bewildered McGregor. For Motherwell’s
second, he looked utterly disinterested, as a Kaiyne Woolery effort from a tight angle somehow snuck
past McGregor, who had barely tried to save it. McGregor has been called into question by many ‘Gers
fans for his recent performances, though when results go our way, those questions tend to be drowned
out. Today, McGregor was not redeemed by those ahead of him to continue starting for Rangers, and
Giovanni Van Bronckhorst will need to re-evaluate McGregor’s No.1 berth if we are to win this title race.

James Tavernier – 7.5 (7)
James Tavernier began the game positively, pressing down the right flank and interchanging passes with
Sakala throughout. We would see Tavernier put crosses in early today, which Morelos was sadly unable
to meet on certain occasions. Rangers earned 15 corners today, and Tavernier would try different
routines, with the most notable being playing it short to Kent. There was no sign of him linking up with
Aribo from corners, which was odd as it has worked for Rangers often in recent times.

Connor Goldson – 5.9 (6)
Connor Goldson would start his game in a way familiar to him, moving forward with the ball and playing
long passes from deep. This was a welcome sight, as Goldson had been appearing more reserved in
recent games when in possession. Particularly in the first half, Rangers were recycling possession from
attack to defence, showing they are not afraid to start over if the previous attack hasn’t worked out, and
Connor would be effective in pushing his teammates forward. In the second half, however, Goldson
would lose out to Motherwell’s attacks twice, being beaten by Roberts who would tap-in, and then
losing his footing which would allow Woolery to get his shot away and into Rangers’ net.

John Lundstram – 6.5 (6)
John Lundstram started today in a centre-back pairing with Connor Goldson, and initially he didn’t look
out of his depth. In fact, John Lundstram would slot in well as a ball-playing centre-back, playing long
balls from deep, similar to Goldson. Lundstram would finish the game with 100 passes, and a passing
accuracy of 93%, which while impressive, it would’ve been more useful had he not started at centre-
back. He was unlucky not to score himself, as a powerful left footed effort was saved by an acrobatic
Liam Kelly.

Calvin Bassey – 6.3 (6)
Calvin Bassey looked positive in the beginning, with his pressing and quick footwork earning fouls and
causing Motherwell problems down their left flank. However, his crossing was poor today, and unlike his
performance against Dundee United, Bassey would rarely find himself advantageous positions to cut the
ball into Motherwell’s box. Bassey would be the catalyst that saw the ‘Well narrow our advantage, as he
failed to react to a pass from John Lundstram, which a quick counterattack and goal.

Scott Arfield would make positive runs off the ball, often finding himself in good attacking positions,
however on the ball he was nowhere near as active. Mainly spending his time deep in the centre of
midfield, he would regain possession several times to keep our attack going. It would be nice to see
Giovanni Van Bronckhorst switch Arfield out of his starting role for someone with the intensity that this
stage of the season demands.

Glen Kamara – 6.4 (6)
Glen Kamara was fairly anonymous early on; however, he would come into his game as it went on, and
rarely put a foot wrong. Kamara’s composed hold- up play, 91% passing accuracy and 80% duel win rate
is indicative of your typical Glen Kamara performance, which is a positive considering this was Glen’s
return to the Rangers starting fold after two substitute appearances against Borussia Dortmund. Glen’s
shooting ability still leaves something to be desired, though.

Joe Aribo – 6.9 (7)
Joe Aribo was Rangers’ main attacking asset from midfield today, and he didn’t disappoint in that role
today. Showing consistency, his hold-up play was effective, and we would witness him link-up well with
Ryan Kent and Calvin Bassey again, although this did not have an impact like it did at Tannadice. Coming
short to receive passes and encourage his teammates forward, Aribo was the key attack coordinator in
midfield.

Fashion Sakala – 7.9 (8)
Fashion Sakala looked menacing from the get-go, as his chemistry with Tavernier down the right wing
was effective in earning Rangers most of their 15 corners. His pace was electric going forward, and his
timing would be rewarded as he latched onto a loose ball to hammer it low and into Kelly’s net for
Rangers’ second.

Alfredo Morelos – 8.6 (9)
Alfredo Morelos would almost immediately give Rangers the advantage, with a shot in the second
minute hitting off the crossbar and over for a Motherwell goal kick. Morelos would find himself on the
scoresheet 22 minutes in, heading neatly from a Ryan Kent cross to beat Liam Kelly and give his side the
lead. ‘El buffalo’s hold-up play was great, which meant he was able to spray passes across both wings
with confidence.

Ryan Kent – 8.1 (8)
Ryan Kent’s footwork was on show early, with him dancing past defenders but unfortunately losing out
often in the final third. Kent would link up positively with Calvin Bassey and Joe Aribo once again, as they
offered him passing options while looking to get the ball away. Ryan Kent’s corner routine with James
Tavernier would pay off, as his early cross into the box after an initial Motherwell clearance would find
Alfredo Morelos who headed in to put Rangers 1-0 up. He tried to backheel the ball late on and failed to
find anyone, which undoubtedly frustrated many, however hopefully we can see his flair be more
fruitful in future games.

Kemar Roofe was brought on Fashion Sakala, and could have had scored late on, however his half-volley
was easily saved by Kelly in goal.

23 Nov 2019
question_answer0
Football. It’s a funny old game. That is one of the most commonly used phrases used for the sport that…

2 Jun 2020
question_answer0
By Jamie Currie. There is no denying Gheorghe Hagi’s standing within the world of football. Hagi is a Romanian football…

25 May 2020
question_answer0
By Ross Hutton The existence of God is one of the most passionately debated topics in human history. There are…
Menu
This website uses cookies to improve your experience. If you continue to use this site, you agree with it.
Ok