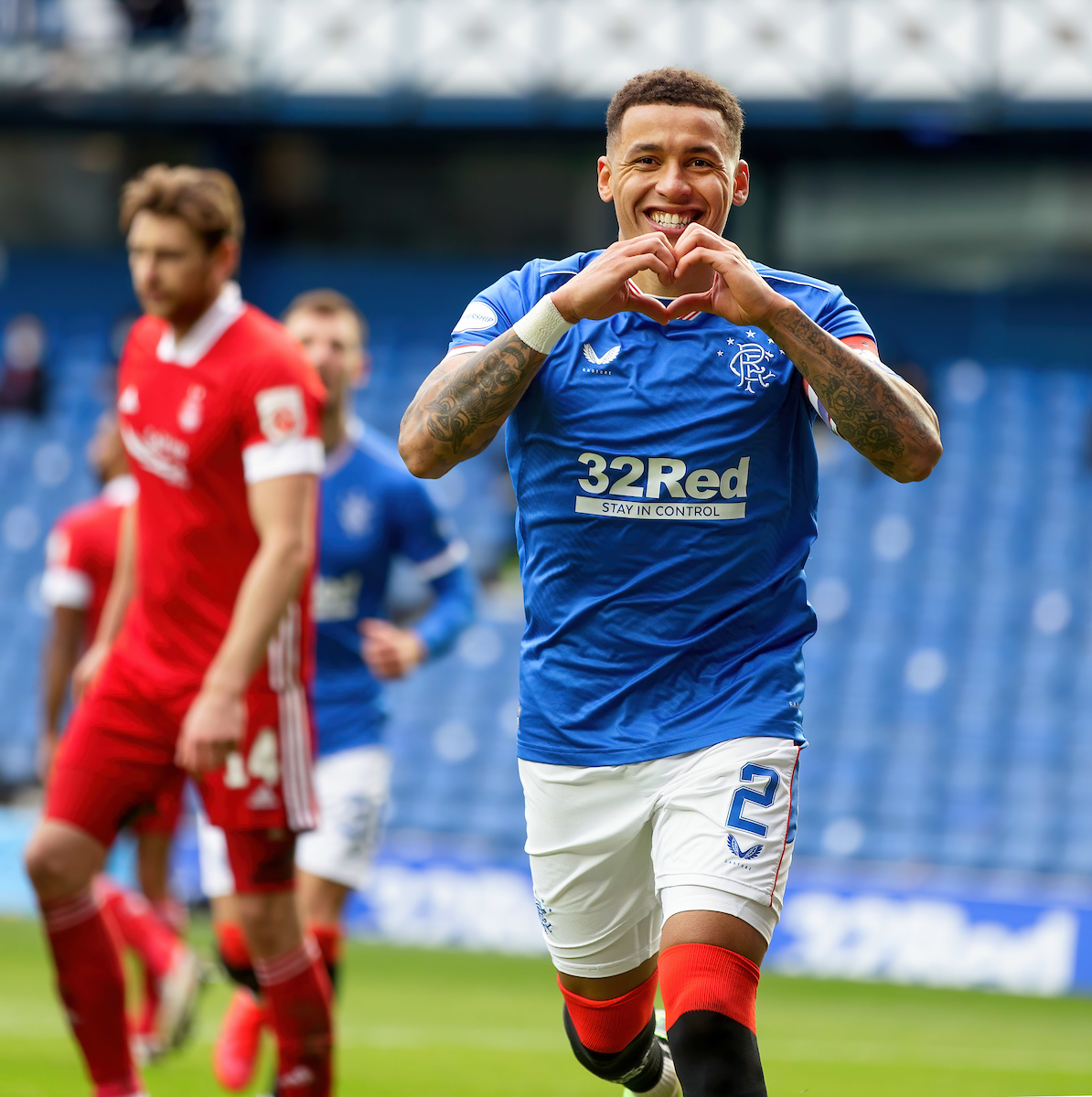 In the past we have struggled with the adjustment of returning from an international break, and when it would be one of the bigger games that would be awaiting us, there would be slight worry over whether we could start as we mean to go on. But this season is different. This season is one where we can feel far more relaxed about our side, because we are just a much better side now. We are more consistent, we are more ruthless, we have a depth of squad that was not present for over a decade. And against teams that are missing a few of their important cogs, we brush them aside. This is a confidence that the team have earned, and who themselves look just as confident as well. It is a feel good factor that is surrounding everyone in our fanbase, and we just need to keep that winning momentum going as much as possible. One game at a time.

Aberdeen did present a bigger challenge than the vast majority of teams in our league, and some of their players did cause a threat at points, but once we got our first goal the tone was set for what would be a very comfortable victory. A return to form for our catalyst and a continued show of class from another attacker was what did the job for us in the first half. And the second half was goals from two of our most consistent performers of the season. It was not for the want of trying to add to our scoreline, plenty of opportunities but no luck. We now move on to Europe once again, and plenty of these players can expect to start as part of what would be the “first eleven” before some changes for our League Cup match next weekend you would imagine.

Here is how you rated our players after our victory on Sunday.

Allan had more work to do, especially in the first half, but the saves he did make were comfortable for a keeper of his level. He is well positioned to deal with the shot from Hedges, as well as the free kick Aberdeen had right at the end of the first half. Aberdeen were more huff than puff in the second half so there was a bit less threat in that respect, but any chances Aberdeen had, particularly from Main, were again comfortably dealt with by the experienced and quality keeper.

The top goalscorer in the league is a right back. It’s our right back. And our captain. And he has an aura when it comes to taking a penalty, a rightfully awarded one in case anyone reading is thinking that there is a conspiracy (and if you are that person, get a life you moron), and as soon as you see the words “Penalty To Rangers” you just know its going to be a goal. Outwith set pieces, his movement and passing was again really good, and could have assisted three goals had the finishing been more clinical. Great again. Really great.

Our defence was a case of one secure and one shaky. Connor was the secure one. That will come as no surprise to anyone who did not watch the game and has been aware of the consistent form he has shown through out the season. Any time Aberdeen broke, Goldson was ready for the challenge and more often than not stood up to the test and looked solid. He also plays the long ball that leads to the second goal, it was nice to see that kind of ball pay off, because he is very good at that as well.

And we come to the more shaky of the central defenders, but even at that he was still fine, but there was an obvious gap between the two I thought. The problem was that he just seemed targeted more for the Aberdeen attacks, which was fair enough given he did look a bit more unsure at times defensively. His athleticism was an obvious plus point for him being involved in this game, and there were occasions that it was used to good effect. But he was sometimes slack on the ball which could have potentially cost us. The plus point is he wins the penalty for us by being hauled down in the box. Not a disaster, not a catastrophe, but I would not be surprised to see Big Fil back in the line up for Thursday.

“Oh aye, Borna!” That was kind of the reaction to Barisic on the odd occasion he was on the ball, because lets face it, he wasn’t really involved in any of the attacking play, it seemed focussed down the right hand side or in the centre. No harm to him for that I guess, although maybe he is not as solid in defence as he could have been which is why Aberdeen also seemed to attack more down their right as well.

Some smart and well played passes in the middle of the park that could lead to some assists, but the attacking intent was always on show from Arf. He finishes off the third goal, having been very unlucky not to score merely 30 seconds prior with a blocked shot. This shot also hit an Aberdeen defender but on this occasion it deflected into the net. He really deserved the kudos for getting the goal, not only for the effort today but also the effort across the season so far. A very important part of our season.

You always keep a closer eye on Ryan Jack in these kind of games for obvious reasons, and off the back of being an important part of Scottish football history, he again puts in a good display in the holding role. He was unfortunate in conceding the free kick on the stroke of half time, but that was the only blot on his copy book I thought. Otherwise it was a very good performance, and maybe he is beginning to exhibit evidence of why he is capable of being the heir to Steven Davis’ holding mid throne.

I thought the intent was always there from Joe but he was just unfortunate not to be one of the goalscorers. Quite a few shots that were blocked, in particular the chance early on that he could have slotted home had he not been closed down by all and sundry. Despite not getting a goal in his 74 minutes on the park, he is always worth having in the team in games were you expect to do the vast majority of the attacking.

The level of class we are getting from Kemar Roofe is very exciting. Especially when you consider the relatively low fee we actually paid to bring him to Ibrox. The goal he scores is just all sorts of quality. His movement, the way he brings the ball down, the run inside and the calmness to wait for the right moment to strike the ball in. All of it was fantastic, and he is without question one of our best attacking players.

Some fans were quite critical of Morelos and not doing the basics. I think what they are wanting is for him to be the main striker and play like one, but this system works best when he comes deeper. If you think of the way Liverpool’s most common front three from last season were, Alfie is doing the Roberto Firmino role, and is more of a centre forward than a striker. What this does is allow Roofe and Kent, like Salah and Mane, cut inside more and be far more of a threat in those areas. His maturity on the field is getting better as well, playing smarter passes and thinking more about the bigger picture in the game. And I have no issue with him being disappointed in being subbed off, it shows he wants to score, and a hungry Buffalo makes a happy Rangers.

I think we are seeing the return of Kent’s form, we are definitely seeing the return of his smile. Despite missing a great chance in the opening three minutes it did not phase him, and on 15 minutes he opens the scoring with a strike from over 20 yards out which curls in with the aid of the slightest of deflections. That relief for him to get that goal was so obvious to see, and now that he has shaken that off I can see him going on a very tidy run going forward now. Very exciting times ahead I think.

Into the action at a point where the game was secured, without a great deal to really do. I can see him playing on Thursday from the start, for his game management and experience, which is likely the reason why he did not start here and would be very unlikely to start next Sunday in Falkirk.

Again I would expect Kamara to start on Thursday and, like Davis, having been on international duty he will have welcomed the chance to only have a small run out.

I remember him scoring at Pittodrie and being really excited by the prospect of what he would give us long term. I think we can all agree he has delivered on that, and I still think he has plenty to offer us domestically this season.

It says a lot for the drop in the pecking order for Hagi that I think he will start against Falkirk as a way to try and force his way back into the first team picture, because at the moment there is no real reason why he should be. Apart from the fact that he is of course our leading assist maker. It’s a strange case his.

I also expect Itten to start at Falkirk, and I think he could do with the chance to bang a few goals in in a match like that, all going well of course, as it would at the very least prove to those who doubt his requirement that he is one for the long term.

19 Feb 2020
question_answer0
Whenever anyone says ‘Livingston’ from now on I will always remember wind, rain, postponement, 24-hour turnaround and a LOT of…

18 Jan 2020
question_answer0
I really, really do not want to go over this game again. It does not matter if we played well,…

Player ratings from our first game of the 2020-21 season.