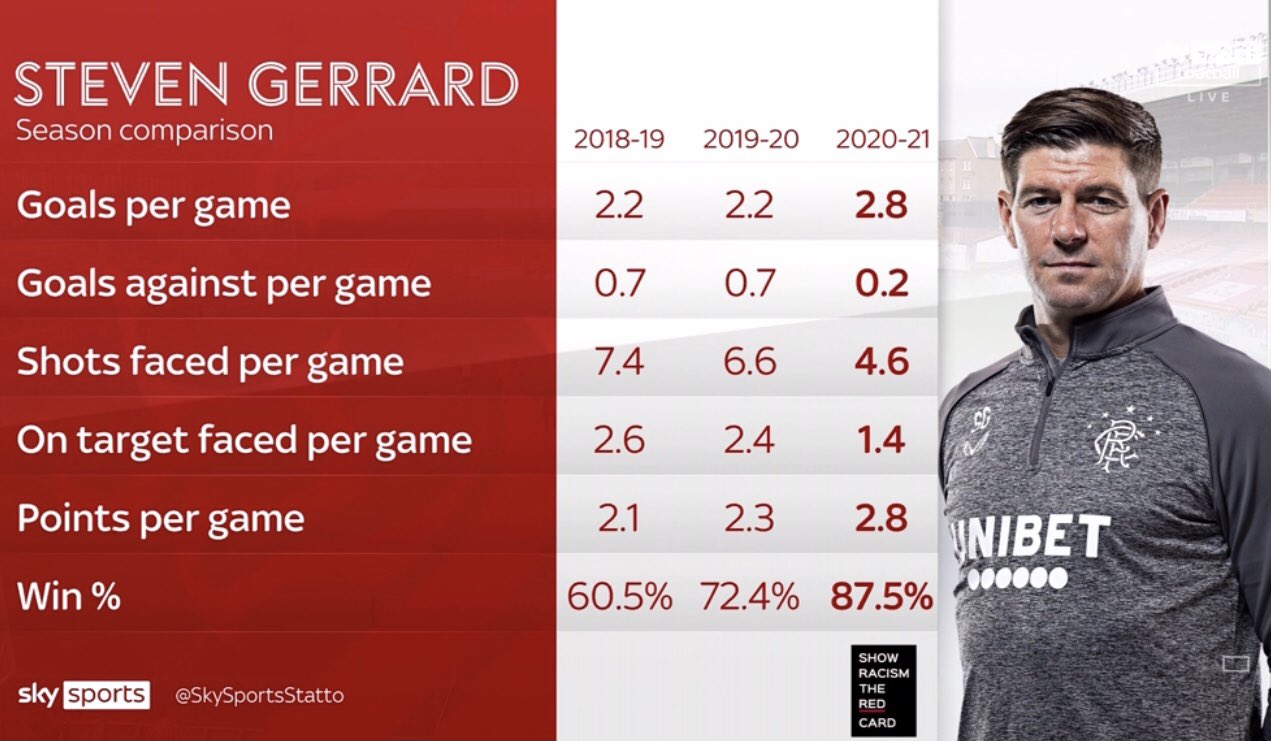 Oh, how we have not missed this feeling. The nightmare before Christmas in Paisley on Wednesday night has reopened some scar tissue from early 2020, accompanied by many of the same emotions and reactions and accusations towards the team from us as fans. As is what always happens after a Rangers defeat, social media becomes a place for scathing hot-takes and vented frustration, ultimately leading to disagreement and hostility towards one another. The pain of yet another major trophy slipping from our grasp has been felt deeply since that third goal crashed into the back of the Rangers net, but while the reactions have been largely what you would expect, the root of that pain comes from an inherently different place than before.

Under Steven Gerrard and the current management team, the progress we have made as a side is undeniable. This Rangers team is a different animal completely to the mess Gerrard walked into in the summer of 2018 and the year-on-year improvement in results has demonstrated as such – despite what pundits in the media would like to have you believe. The graphic provided by Sky Sports before Sunday’s game at Tannadice is an excellent representation of the giant strides we have made under this management team. In Europe, the progression from qualification to the group stage to qualifying out the group to qualifying top of the group is yet another tangible testament to the growth of this Rangers side.

And that is where the frustration lies.

The knowledge that we are a quality side makes results like Wednesdays harder to process. This is a Rangers side with bags of talent and ability in every department and it is possibly that fact that means people look at the psychological aspect of the game for a reason as to why these results happen. This is what this piece will try to address.

The psychology of football and footballers is a growing field of study within the game. It is, as bizarre as it may seem, still a field of study in relative infancy – even being described as “the last frontier” of sports science. While (understandably) so much emphasis from clubs is placed on what a player can do with their feet in the form of Kinesiology (the science of human movement), it is equally if not arguably more important for a focus to be placed on what a player can do with their mind in the form of Psychology. And with that, there is a couple of vital elements.

Confidence is a difficult thing for a football team to grab hold of and an even more challenging thing to keep hold of. It can take months and years to develop and be lost within the space of 90 minutes, such is the fragile nature of football and fact was demonstrated in a microcosm on Wednesday evening.

Rangers began the game as confidence personified, as we should have given our start to the season. Goldson galloping forward before driving a low shot into the back of the net embodied everything good about Rangers attacking play so far this season; diversification of attacking options and multiple goalscoring threats. While this may on the surface seem like the result of a good player having a good season so far, there is a psychological aspect to this as previous research has shown defenders to actually exude more confidence than midfielders and forwards, as can be seen in Figure 1.0.

The problem with confidence, as already explained, is it is a fickle thing. Psychologists agree that the brain is “hardwired” to latch onto negative experiences. For a non-sporting example, you may dine at the same restaurant 100 times and have a single bad meal, it is that individual bad meal the brain will remember above the 99 good meals. AS Neuroscientist Rick Hanson describes:

“The brain is like Velcro for negative experiences and Teflon for positive ones”.

Bringing it back to Rangers, this is evident in our psychological reactions to events as supporters. We are instinctive to project our fears and negative experiences onto the playing squad. Examples of this include the 1-0 and 2-1 away wins at Pittodrie, Rugby Park and Tannadice, where many fans (including myself) felt that a late equaliser sucker-punch was inevitable in the final moments because of the scar tissue from games we remember so well. This is known as Cognitive Anxiety (something which will be touched upon in greater detail later), in a sporting sense this is your worries, doubts and fear of losing that we all have as fans. This isn’t always a negative, as that fear can actually drive high levels of performance (which again will be explained in greater detail later). In those matches mentioned, the players have managed to channel their Cognitive Anxiety to see out the victories. In doing so the players have shown mental strength – a concept that goes hand-in-hand with that of confidence. Quite simply, this is the ability to cope with challenging circumstances which this season, until Wednesday, Rangers have done in spades.

This is evidenced by Figure 2.0, which details the seasonal improvement in Rangers under Steven Gerrard with regards to dealing with adversity and displaying mental toughness. A lot has been made (rightly) throughout the Gerrard tenure about our inability to see games out from winning positions, throwing away leads and points, however when the total points dropped from winning positions is examined season-on-season, it can be found that it has decreased each year from 13 title-costing points down to two at the time of writing.

Furthermore, Figure 3.0 details the points gained from losing positions under the management team. As you can see, in each season we have decreased the games we have fallen behind in as well as decreasing the total number of points dropped when we do fall behind.

As you can see, there is a year-on-year improvement in the side in ensuring that points are won from positions of adversity with the team learning how to react mentally when falling behind and developing the mental strength to see out leads when they get them. This shows a tangible development within this Rangers side under this management team, as they learn and develop together as a cohesive unit, they are beginning to minimise the amount of times they need to fight from losing positions to win games and increase the amount of leads that are held as confidence within the side builds.

This will not come as a shock, but there is an inherent link between the anxiety over a situation and the performance of the player, with two of the primary reasons for this being the expectations and the importance of the competition. This feeds into one of the fundamental criticisms of this Rangers side that it cannot do the business when the pressure and expectations is on them and because this is Rangers we are talking about; every competition is important.

Having said that, there are inevitably more high-pressure games than others – An Old Firm is an objectively more pressurised fixture than Hamilton at Ibrox. Cognitive anxiety (as previously mentioned) is a fundamentally complex phenomenon but it has a somewhat simple affect on the performance of athletes, as can be seen in Figure 4.0 (a and b)

Here, we see the effects of high and low cognitive anxiety on performance levels. When the athlete is under little anxiety and stress, there is very little to drive performance to the optimum level. However, as you can see from figure b, an optimum amount of stress and anxiety can actually drive performance to it’s peak. The problem arises when that balance between Anxiety and Performance fails, and both collapse. This is known as The Catastrophe Model. This on the surface may seem like an argument against the squad’s mentality, saying that once the pressure is ramped up they cannot preform and fall off a cliff.

However, I don’t believe that to be strictly true. Think back if you may (and I apologise) to the Betfred Cup Final of 2019. For many of the players within the squad, that was their first taste of a final in a competition with Rangers and, as hard a pill as it is to swallow, they put in a performance deserving to win the game and had it not been for a Man of the Match display from Fraser Forster and poor officiating, that would have been the case. Using this game as a case study and measuring it against the catastrophe model, it is clear to see that the players rose to the challenge in the highest-pressure fixture many of them had played in, and had it not been for lady luck turning her back on them they would have been granted their just reward.

Once again using that model, let’s take a look at the game in Paisley in this seasons Betfred Cup. This was a game against a side who currently sit 10th in the league table, 32 points behind us, in a competition our biggest rivals were already eliminated from. We went into the tie unbeaten in all competitions, having recently topped our Europa League group. On paper, (no disrespect to St Mirren) this game should have been routine for Rangers. I.e., a game of low cognitive anxiety. The issue arises (and this has been thoroughly well documented since the final whistle) is that once you enter that state of mind it is difficult to change it, and the low cognitive anxiety the team would have been feeling prior to kick-off resulted in a lower level of performance, as the model (and Rangers, sadly) demonstrates. In this instance, there is a much simpler term for the low cognitive anxiety driving that poor performance – complacency. The team thought that they could turn up in this competition and saunter their way to a cup final, forgetting that we are every team’s cup final, and that is an entirely different mentality issue to the one that is currently being labelled at the side.

This is far from a comprehensive analysis of the mentality of Rangers (you could write a thesis on the issue) but it does hopefully shine a light on some of the factors that are in play. This piece isn’t meant to come across as a lecture, nor Is it meant to paper over cracks. I certainly said things in the heat of the moment on Wednesday evening that I didn’t particularly mean in the cold light of day. I myself have questioned the mentality of this side and have expressed concern about our ability to get over the line in certain matches. However, what I hope this article does demonstrate is that steps are being taken in the right direction at Rangers and that the psychology of our team is a complex and constantly evolving situation. The progression so far has shown that Wednesday was a painful blip in what has otherwise been a near-faultless start to the season on all fronts.

Regardless of that start however, the copybook has been blotted. All we can do now is turn the page, continue writing our own script and reclaim the narrative. The fightback begins on Saturday at Ibrox with a massive chance to pile the pressure on domestically. Let’s go.

If you are interested in further reading on the subject, it would be remiss of me not to credit some of the books and articles that helped guide this article:

Goswami Sukanta: ‘Psychological Characteristics of Football Players According to Their Playing Positions’.

25 Feb 2020
question_answer0
By Jamie Currie Rangers contrived to drop more points in the title race, this time at McDiarmid Park, as they…

27 Feb 2020
question_answer1 Comment
The rush to condemn and criticise on social media after a Rangers drawor loss is hugely tempting and we’ve all…
Menu
This website uses cookies to improve your experience. If you continue to use this site, you agree with it.
Ok