Rangers lost their first-leg last 16 Europa League match against Bayer 04 Leverkusen by a 3-1 scoreline. Unfortunately for Steven Gerrard’s men, a second-half George Edmundson header could not inspire a comeback like Braga as the German’s were able to see out the result through goals from Kai Havertz – from the spot – Charles Aranguiz and Leon Bailey.

Rangers, despite the graphic, played their notorious 4-3-2-1 system, with Joe Aribo coming into the side to replace Ianis Hagi. Gerrard’s game plan was to be compact in a low block and pick and choose when to trigger the press and hope to profit from Leverkusen’s risky passing from the back.

Peter Bosz, you knew what you were going to get with his side: high pressing plenty of possession and the ability to speed up and slow down play at will. Furthermore, in the 3-4-3 his side would look to make the pitch as big as possible and look for the switch when it was on after patient build-up.

At times, it was a chasing, especially in terms of the possession stats. However, despite Rangers having just 25% possession in the first period, they were able to limit the German Bundesliga side to four shots and only half of them were on target – one being Kai Havertz’s penalty. The above image illustrates how Rangers went about nullifying the Germans’ threat. Mitchell Weiser has to go back to Tah – who is out of the picture – but Tah has to go along the backline and try and play down the left to Wendell. He cannot go into Aranguiz because Ryan Kent and Alfredo Morelos are closing off that passing lane. Also, Weiser is being pressed by Kamara, therefore, he couldn’t settle on the ball and play progressively for the away side.

The above image show Rangers’ front six tight, and compact and shutting off the central passing lanes. This again, is forcing Bayer to play between their back three and full-backs as they are unable to play through the lines. There is no space for Aranguiz or Demirbay to break the lines in midfield and such is Rangers’ shape Diaby is so high and he cannot have a positive impact in Bayer’s build-up play.

Again this time the only option is to go wide for Bayer. The player inside is cut off due to Morelos and Aribo manning the passing lane, the only out ball to try and play through the narrow, compact shape is the wide one to Wendell.

Kamberi made an impact from the bench again

Florian Kamberi replace Joe Aribo on 53 minutes and it’s fair to say the forward had an instant impact. The above image illustrates him bringing the ball infield – he is able to take the circled Bayer players out of the game and create space for Tavernier to drive forward. This move ended in Morelos testing the goalkeeper but the way Kamberi created the space and initially for Rangers to create the opportunity was something they were missing from Aribo.

The Kamberi-Morelos relationship is one that seems to becoming better game-by-game. The above instance is Kamberi and Tavernier pressing high. Kamberi could have cut in and had a shot after winning the ball back, but he tried to find Morelos, who had made the run ahead of Tah. However, Tah heroically got a long leg to the ball and prevented a certain equaliser.

Five minutes in and the Havertz dilemma for Rangers was evident. Man-mark or not? They went with the zonal option. You can see how deep he drops. Steven Davis is the one who is in his zone. However, with Arfield pressing the ball on the right side, it allows Bellarabi – out of picture – Demirbay and Aranguiz to leave their midfield berths, knowing they have three players in defence and join the attack.

Early in the second half, this time Havertz is able to start the play deep and start an attack. He is being marked by Edmundson, however, such as his presence in the Rangers box, he attracts James Tavernier to get round on the cover to help clear the cross coming in, but that in turn leaves Diaby free at the back post. Luckily for Rangers, they came out of this Bayer attack unscathed.

The final Havertz contribution in terms of creating attack space came not long after, he draws Kamara infield, then Kamara has too much ground to make up so he cannot get out to Weiser to help stem the flow of the attack. Bellarabi also occupies Barisic, meaning the Croat cannot press the ball either or he will leave Weiser with a simple ball down the channel and it would have left Bellarabi one-on-one with Edmundson.

Whether we get to witness the second leg of this match, is another debate. However, whilst Rangers were badly out of form, they came up against a well-coached, vibrant side, who unfortunately on the night were simply better than them. It was no disgrace as in spells Rangers showed flashes of quality and it was easy to see why they had progressed this deep in the tournament. However, when a team shows constant quality throughout the 90 minutes against a side who shows flashes, it almost always ends up with one outcome. Rangers can take pride from this display despite the result and take pride in their overall European campaign. It’s a waiting game to see what will happen regarding the rest of the tie, but on the 90 minutes at Ibrox Bayer were deserved victors. 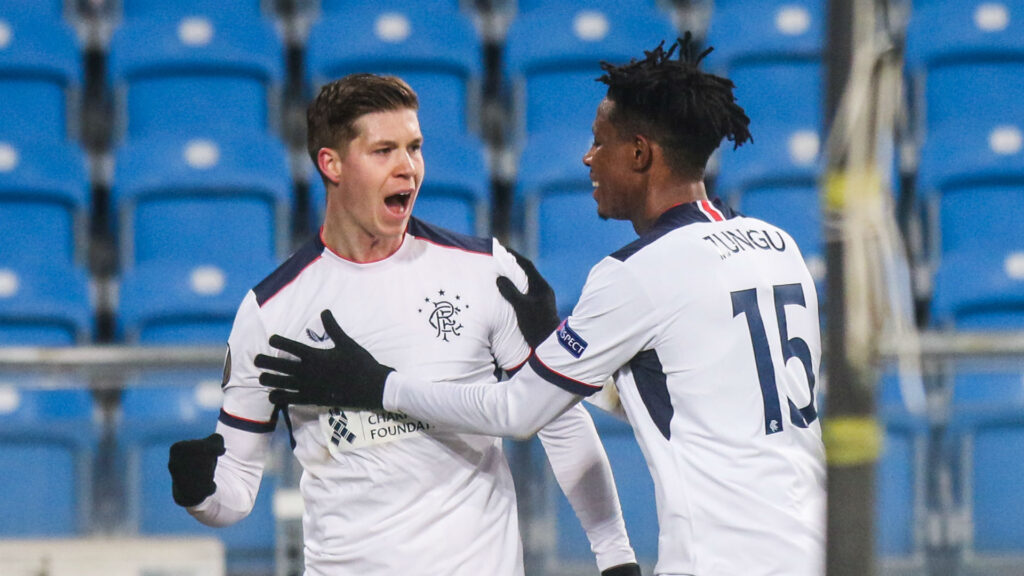 Player ratings from our away win over Lech Poznan.

11 Mar 2020
question_answer0
By Jamie Currie Rangers got back to winning ways in league action after the midweek calamity against Hamilton Accies. They…

4 Dec 2020
It’s May 15th, 2011. A young boy is embarking on a journey along the M77 from Glasgow to Aryshire, Kilmarnock…
Menu
This website uses cookies to improve your experience. If you continue to use this site, you agree with it.
Ok