Rangers Women to kick off their season…again!

Laura Clarke returns with an overlook of the Rangers Women team who prepare to usher in a new era after the false start earlier in the year.

Rangers Women will kick off their 2020 season for a second time in just over a fortnight. As was the case in February, their opening fixture will again be against newly promoted Hearts on Sunday 18th October. After significant investment and changes to the women’s team in the winter of 2019 (more about that here – https://heartandhand.co.uk/rangers-wfc-a-new-dawn/) they had a relatively comfortable opening to their 2020 season with three 3-0 victories. The aforementioned game against Hearts being the only league fixture of the three. However, no one could have foreseen what was to come and how things would change so quickly.

On Friday 13th March things ground to a halt before they really got going with all Scottish professional and grassroots football suspended until further notice due to the coronavirus pandemic. With the uncertainty and fluidity of the situation, no one could have predicted that “further notice” would be some seven months. The women’s domestic season was scrapped and a new women’s season, which is usually played across the summer, was pencilled in for October.

Despite the lack of action on the pitch there was still plenty happening off it. In June, Gregory Vignal stepped down from his role as Joint Head Coach after a mutual decision to leave the club. Although only in the role for a year, Vignal played a crucial role in the development of the women’s side as they transitioned to a full time set up.

Three weeks after Vignal’s departure Kevin Murphy returned to the club after a 4 year hiatus, in a new dual role of First-Team Assistant Coach and Girls Academy Manager. During his spell away from Rangers Murphy developed his reputation, as quoted on the club website, as: “one of the top practitioners in the women’s game in the country”. This was in no small part due to his spell as Technical Director of Manchester City’s highly respected and hugely successful Women’s Department. In January 2019 Murphy returned north of the border as Girls Academy and Women’s Manager at Hearts. The reaction on social media from the Rangers squad to the announcement of Murphy’s appointment showed the high regard they hold him in and he will no doubt bring a lot to the table.

The club continued to be busy in the transfer market with Sam Kerr, Kirsty Howat and Rachel McLauchlan all signing from Glasgow City on pre contracts that will see them available for selection from 2021. Arguably, the biggest signing was the capture of Lizzie Arnot after the expiry of her contract at Manchester United. The Scottish international’s game time was somewhat curtailed last season but she will always be in the history books as the player who scored Manchester United Women’s first ever-competitive goal. Arnot is a goal scorer and this is something that, despite the ease of their victories, Rangers struggled with in February. The side created a raft of chances, particularly against Queen’s Park, but failed to convert. On occasion when you play against so-called lesser opposition, you can fail to take chances and get away with it but this would need rectified ahead of sterner tests against Glasgow City and Celtic. The return of Zoe Ness from injury should help the goal tally and it will be further bolstered in January when Kirsty Howat, last season’s SWPL1 top goalscorer, becomes available for selection. Competition for places will be very high this season and this can only be a good thing.

After 231 days (but hey, who is counting) Rangers Women will pull on the famous Light Blue once again and it will be in form of a bespoke shirt produced for them by Castore. The variations include a special alternative zig-zag print pattern in place of the waves of the men’s and junior home shirt, as well as a bespoke neck style and a fitted shape for women. DCP will be the front of shirt sponsor, with Utilita the back of shirt and A Friend design agency the sleeve sponsor. The kit will be available to buy from The Rangers Store and online later this month. This is a major sign of intent from Rangers in their commitment to developing the women’s side of the club. For some context, the England Women’s national team, a superpower in women’s football, only launched a bespoke women’s kit for the first time in 2019 for the World Cup. Let’s hope we will be seeing the girls end an 11-year drought by lifting a trophy in this new kit come May.

February 7, 2020
question_answer0
Rangers Women’s side are making their final preparations for the new season, which kicks off this Sunday. Rangers host Queen’s… 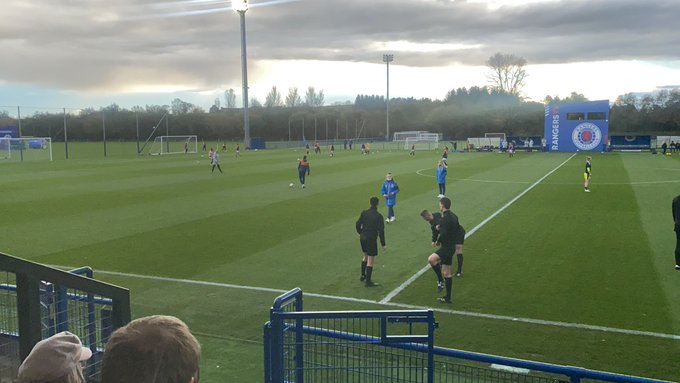 October 31, 2021
It was an all too familiar feeling as Rangers once again fell to defeat against Celtic despite having the majority…

Three is the Magic Number

March 2, 2020
question_answer0
Rangers Women continued their perfect start to the season with a 3-0 victory over Hamilton yesterday in the SWPL Cup.…
This website uses cookies to improve your experience. If you continue to use this site, you agree with it.