Three is the Magic Number

Rangers Women continued their perfect start to the season with a 3-0 victory over Hamilton yesterday in the SWPL Cup.

Lisa Martinez put Rangers in front after 13 minutes when she slotted a Demi Vance corner into the bottom left hand corner. Kirsten Reilly tried her luck soon after but she drilled her effort straight at Sarah Rhind in the Hamilton goal.

Megan Bell grabbed her 4th goal in 3 games on 22 minutes to double Rangers lead. A Daina Bourma through ball was redirected into Bell’s path by the Hamilton defender and she made no mistake as she charged through and calmly poked the ball past the advancing keeper. Bell nearly added a third before half time, this time from a free kick but Rhind did well to get two hands to it and push the ball round the right hand post.

Lisa Martinez scored her second and Rangers third goal in the 68th minute with a powerful header from a Bell corner from the left. Rangers could have added another after Hamilton put themselves under pressure trying to play short from a goal kick but Bourma could only direct Emma Brownlie’s cross into the keepers arms.

Rangers sit top of Group B with one game remaining against Dundee United. This game fell victim to the weather and a date for the rearrangement has yet to be confirmed.

Rangers head into the international break having played three, won three, with three clean sheets and three goals scored in each. A start that is sure to have pleased Joint Head Coaches Gregory Vignal and Malky Thomson as this new look side continues to gel.

The girls return to domestic action on Sunday 15th March, when they travel to Spartans in the SWPL. 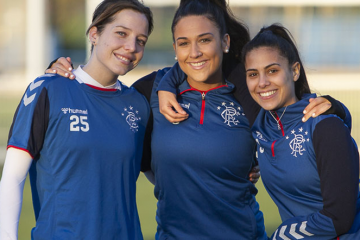 Rangers Women’s side are making their final preparations for the new season, which kicks off this Sunday. Rangers host Queen’s Park in the SWPL Cup, having also been pitted against Hamilton Academical, Dundee United and Queen’s Read more…