With Celtic losing in Livingston, Rangers knew that a win would see us return to our rightful place at the top of the pile, after far too long a gap, at this stage of a season. You could not have picked a better opponent for us to take advantage of this situation than Hamilton, a side who like to at least try and play a bit of football under Brian Rice, but their budget is simply nowhere to be seen (why does that phrase sound so familiar?). However, two seasons previous we fell to a 2-0 defeat against these opponents, so complacency should never be accepted in these situations. A 5 goal win, a hat trick from Jermain Defoe and a number of excellent individual performances saw us reach the Scottish summit and put us in a much better mood for this current international break than the previous one.


Allan McGregor – 7
Did not have a single thing to do in this game I think! Kept himself busy by talking to himself, I wonder what it was about? “Got a week off, what do I fancy doing? Wee trip down the coast…maybe even get an ice cream.” I’m sure that’s what he was thinking…but if I gave him a 6 I’d be worried he would batter me so 7 for you Allan!

James Tavernier – 7
The Ibrox crowd was very supportive of our captain today and I was delighted to see that, and he put in a better performance today for sure. His cross for Rangers’ second goal of the game was excellent, he had a few really tasty deliveries in fact, but it was brilliant to see him get an assist along with some nice attacking intent. Still not quite the outstanding overall display but certainly getting better.

Connor Goldson – 8
Goldson was another one who was under particular scrutiny of late, but this was his best performance for us for a good few weeks at least. The goal he scored is one if the best one-two’s you are likely to see. The boldness from him to bomb on into the box and look for the cross to head in was a surprise but at the same time delightful, and quite right that he milks the celebration for all its worth. Looked a lot more composed at the back too, so a very nice day for Connor.

George Edmundson – 7
You wonder whether part of the reason for Goldson’s much improved performance is anything to do with who was partnering him at the back. Edmundson’s inclusion may have been seen as a surprise for many who believed that the only appearances we may see from him this season would come when Goldson was not playing. But, based on what people have said about his training and attitude, as well as his brief cameo against Aberdeen last weekend, he deserved a shot. He maybe made one or two small mistakes, but his recovery work was excellent, and his speed for his size is something I’ve still not quite got used to yet!

Borna Barisic – 8
Never have I seen someone look so happy to have scored a goal at Ibrox. The position of the set piece was ideal for a ‘wand of a left foot’, and Borna again produced the magic. There is no saving that. It dips right at the end and at that point their keeper can only watch as it nestled in the net. You talk about that, as well as the other contributions to the teams cause in this game, and you’re talking about a top quality display from a now fully established first team player for us. If you look at the last month or so, certainly since the end of the last international break, he has to be on the shortlist for our best performer for that period.

Scott Arfield – 7
I don’t like Arfield playing in the middle. I’ve made that clear before, I think what you lose from him in the attack is to the detriment of his full game. His best moment I thought came in the second half when he, along with three or four others, produced some silky one touch passing on the edge of the box which very nearly resulted in a goal for both him and Greg Stewart, but Scott was at the centre of that move which looked excellent. Other than that, a fairly anonymous afternoon, but I don’t think he did anything wrong as such so you can’t be too miffed by him.

Steven Davis – 8
On the very few occasions where we needed our sweeper to mop up some situations, he did so with very little fuss. Again, he looked to create moves, he drove the ball forward, it’s little coincidence that so often we find ourselves so far up the park with him at the base of our attacks. He directs, he leads, he’s an experienced head who, like Barisic, has had a magnificent months worth of football and should rightly be seen as one of our stand out performers for that period.

Glen Kamara – 7
This was a much better all round game from Kamara compared to Thursday. I thought his passing was a lot better, there was more purpose behind his distribution, and he just felt more comfortable on the field (maybe it’s an AstroTurf thing?). What I want to see from him is more dribbling up the park with the ball. I know he is capable of it, so I hope he is given that license to attempt it more, particularly in games like this. As well as that, along with Arfield, these two could have done more to drive the game on when it hit a lull in both the first and second half.

Greg Stewart – 8
I mentioned how I don’t like Arfield in the midfield. To be honest, if Greg Stewart continues to play like this, then I’m going to have to get used to the idea. Or, Scott will have to get used to a place on the bench, because this was a magnificent performance. His pass to Defoe for the first goal was exceptional, it really set the tone for his day, and he was dropping deeper and looking for the ball more this time. He looks more comfortable now in a Rangers shirt, and he would likely be the man of the match were it not for him being unable to find the net, unlucky though he was. Still, he would rightly be viewed as the cognoscenti’s Man of the Match.

Jermain Defoe – 9 – Man of the Match
Enough Latin however, here is the absolute Man of the Match. Hat trick hero, yet again, and although his third goal was a straight forward (for him) smack into the roof of the net, his first two goals are a case of “take your pick” over which one is better. The first, running on to the brilliant through ball from Stewart, a deft touch over Fon Williams which you would be justified in describing as “cheeky”. The second, he collects the ball from Davis but still has a lot to do, yet he uses his strength to get past the Accies defenders and place the ball into the opposite corner. Today, we saw speed, strength, natural goalscoring ability and just a magnificent match from the Englishman. And, what’s funny, he should have had more, but misses like his in the first half from about 5 yards out (difficult chance though it was) show that he is human and is all the more remarkable for finishing chances that he does.

Sheyi Ojo – 6
Sad to say it, but again there are a lot of parts to Ojo’s game here that leave a bit to be desired. Let’s say this for a start, he is unlucky not to have an assist to his name as it is his cross which Defoe should bury. He had a few shots at goal which, again, he is entitled to do because now and again he will catch a shot so sweetly that it will be impossible to stop. But far too often he would back out of challenges way too soon, he would play the wrong ball, he would not track back. It almost looks like he is a player we only signed a few days previous and is getting used to the system and players around him, having been chucked into the starting line up suddenly. When players like Kent and Jones return to fitness, I would expect/hope that Ojo is taken out of the firing line for a bit and gets a chance to work on improving these faults. He’s close, but he isn’t quite there yet.

Matt Polster – 7
A rare sighting of the lesser spotted Matt Polster! And, d’you know, he actually looked quite decent here. There was a great level of determination about him, he was making the right kind of runs from deep and was performing his tasks to the letter. He is an example of how good our squad depth is. A few years ago he would be a key player for us, but now he has a lot of work to do to earn a first team shirt. Perform with that attitude, however, and you do yourself no harm in your chances.

Jamie Murphy – 6
How wonderful to see Jamie Murphy playing at Ibrox. So nearly getting a goal as well, even though he was offside, but he looks like he will offer something different to our wide play when required. He still needs time to properly return to his former self however, but run outs like this will definitely help.

Alfredo Morelos – 6
Imagine the scene. You’ve just conceded a fifth goal at Ibrox, you’re having a torrid time against Jermain Defoe, and you look to the sidelines to see Alfredo Morelos was coming on! I would not have blamed any of the Hamilton players for throwing their shirts to the floor, storming off the premises and going straight home to have a wee cry into their pillow and evaluate their life choices. However, luckily for them, the game went into training ground mode and Alfie didn’t have a great deal of impact on it, not that he needed to. And I would say that I think the time for experimenting with number 9 and number 20 playing together is over, I just don’t see it working, but subbing in and out works very well and is, in fact, something that many football clubs around the world will be envious of to have the ability to swap such strikers of such quality. 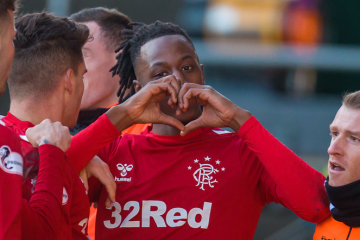 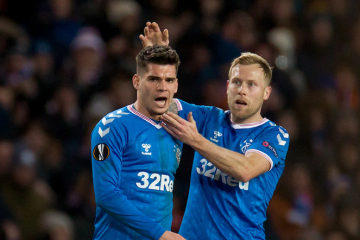 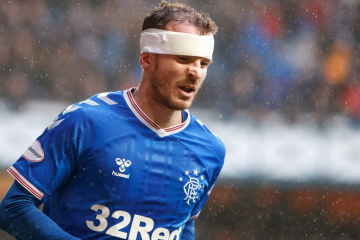 Whenever anyone says ‘Livingston’ from now on I will always remember wind, rain, postponement, 24-hour turnaround and a LOT of driving! What I will not remember so fondly will be the game in question, as Read more…

wpDiscuz
Loading cart ...
We use cookies to ensure that we give you the best experience on our website. If you continue to use this site we will assume that you are happy with it.OkPrivacy policy