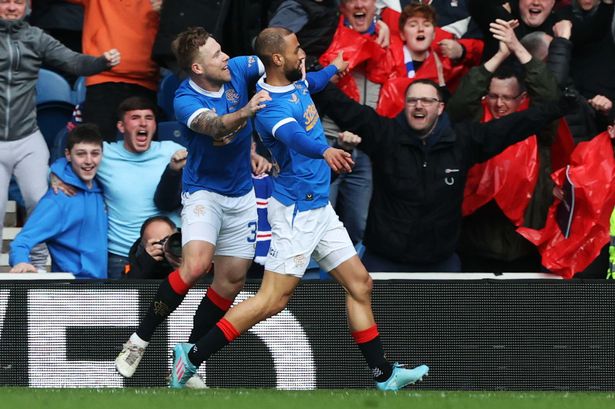 Austin Benson rates our players from our home win over Aberdeen on the day we celebrated our 150th anniversary.

Allan McGregor – 6.9 (7)
Didn’t have much to do against Aberdeen, if anything. McGregor’s distribution was a positive, however.
Giovanni Van Bronckhorst won’t complain with an extra clean sheet for his reliable no.1.

James Tavernier – 8.0 (8)
James Tavernier’s crossing still left something to be desired, however his movement was pro-active, and
with him winning the most duals in the game with 12, his defensive credentials were definitely more
prevalent.

Connor Goldson – 6.5 (6)
Connor Goldson’s passing would once again be his most notable ability, with an accuracy rate of 72%.
Goldson’s runs from deep to get off passes into the midfield were highlights.

Calvin Bassey – 7.1 (7)
Calvin Bassey started out at centre-half, and he performed decently, however his potential would be
better utilised on the left flank. With Borna Barisic’s substitution for Leon Balogun, Bassey would shift to
his favoured left-back position for most of the second half, where his pace was put to good use.

Borna Barisic – 6.6 (7)
Borna Barisic only played 59 minutes of the game, coming off for Leon Balogun early into the second
half. For what it was worth, he didn’t put a foot wrong, and it’s unfortunate to witness his plight at
Rangers. Hopefully, his confidence can improve, however I don’t reckon his substitution will help things
for Barisic.

Ryan Jack – 7.6 (8)
Ryan Jack’s composure was a shining light from a dull performance for Rangers, completing 76 passes
and having a 94% passing accuracy; the highest in the game.

Glen Kamara – 8.0 (8)
Glen Kamara had the most key passes (4) for Rangers, and if Glen Kamara is the main creative outlet
from this game, that should really tell you something.

Fashion Sakala – 5.9 (6)
I am always happy to see Fashion Sakala start games, as his pace I feel would be a massive asset in
Giovanni’s team, however his display was rather lacklustre. While Sakala was making progressive runs,
he failed often to cut in and produce goalscoring opportunities.

Ryan Kent’s movement was positive, although it wouldn’t be rewarded with a goal or assist. A good
effort, however, his overall Premiership statistics might not reflect his work rate in attack.

Alfredo Morelos – 6.9 (7)
Alfredo Morelos played well, continuing to play as more of a creator than as someone who would get on
the end of chances. When Giovanni Van Bronckhorst took Morelos off for Kemar Roofe, boos would be
heard around Ibrox due to that decision, but it would bare its fruits eventually.

Leon Balogun – 5.9 (6)
Brought on for Borna Barisic, Leon Balogun would slot into the left side centre-half position well, and
again his versatility was put to good use.

Scott Arfield – 5.5 (5)
Scott Arfield was brought on for Fashion Sakala, as he featured on the right flank for Rangers again.
Giovanni Van Bronckhorst continues to play Scott Arfield on the right wing, and while Arfield’s effort
can’t be called into question, the tactic of playing him as a winger sure can.

John Lundstram – 6.0 (6)
Coming on for Ryan Jack, John Lundstram made sure to see Rangers maintain their clean sheet before
Rangers opened their account.

Kemar Roofe – 7.6 (8)
Kemar Roofe arrived onto the pitch with boos ringing around him, which no doubt was a confusing
welcome for him. Luckily, he would prove us wrong and Van Bronckhorst right as it was Roofe who got
on the end of Joe Aribo’s delivery to secure the three points towards the end.

10 Feb 2020
question_answer0
This is the second article in this series which aims to describe how Rangers set up tactically. If you haven’t…

12 Nov 2019
question_answer0
Rangers travelled to Paisley on Sunday to seek three points and continue a perfect start to our league campaign. Jim…

18 Jan 2020
question_answer0
As we are at the halfway stage of the season, and we need to suffer through the early part of…
Menu
This website uses cookies to improve your experience. If you continue to use this site, you agree with it.
Ok