Rangers secured their place in the last 32 of the Europa League with a home draw against Swiss champions BSC Young Boys. Our side played an excellent 45 minutes of football and looked set to at least contain the side from Bern in the second half, however we once again lost our way and contrived to make the conclusion to the match a very nervy one for Rangers fans. Although the result was not enough to win the group, it is still a fantastic achievement to have qualified out of a group containing such high profile sides, and it once again provides evidence to the rest of Europe that Rangers, on the continental stage, are very much back on the radar.

Allan McGregor – 6
Had very little to do in the game but at the one point where he needed to have solid hands he couldn’t quite prevent the ball crossing the line. This wasn’t a terrible error from our number one, but in an otherwise quiet night, he did not stand up to the one moment that mattered.

James Tavernier – 7
We are seeing the old Tav come back again. His forward runs are looking far more effective once again, and his use of the ball seems less erratic.

Connor Goldson – 6
Wasn’t as busy in the first half, but did struggle against their big striker when he came on in the second half.

Nikola Katic – 7
Looked well up for it and delighted to be back in the first team, and was putting himself into tackles and rising for headers with glee.

Borna Barisic – 8 – Man of the Match
Completely owned his side of the field, moving up and down the left hand side with purpose. He loves the challenges that comes with being a Rangers player, not something we would ever have said about him six months ago. He has become a real force of nature for the side, and just keeps getting better with each passing game.

Scott Arfield – 6
Is continuing to look more comfortable in the middle of the park, with the idea of him facing goal rather than his back to it making a good difference to his game. Like a number of players, he tired as the game went on and was not effective in the closing stages.

Ryan Jack – 7
It’s not easy to make Steven Davis’ absence seem unnoticeable, but Jack’s performance in the holding role is going a long way to making it seem that way. Tracking back, winning the ball, leading the team in front of him and behind him. Made the correct decision in taking the second yellow card. He will be missed for the game he is suspended for, but it was a team players move to make.

Glen Kamara – 6
Looked really good in the first half and yet dropped drastically in the second half. The good part of his game is the way he runs both with the ball but off the ball as well, but when he tires he looks like such a passenger.

Joe Aribo – 7
Looking more and more comfortable on the right hand side of the attacking trio, his key asset being his passing. Also lost his legs as the night drew to a close and could really have done with being subbed off.

Alfredo Morelos – 8
Composed finish when it must have felt the world had stopped for him, and he really made their defence feel like they were having a torrid evening. Just keeps on running and keeps on looking to score goals, and with his 6th goal of the group stage became the outright leading scorer in the competition proper. And Alfie, you of all players do not need to apologise for anything.

Ryan Kent – 6
I saw comments from fans saying that he did not look interested etc, but I think it was simply a case of things just not falling for him, not through lack of effort, but these things tend to go in cycles and with the expectations placed on him due to how high an asset he is, it’s natural for people to believe he had a bad night when in reality it was simply an average one.

Sheyi Ojo – 5
Quite baffling that he is the only sub used on the night, especially when again we see moments where he ducks out of challenges and loses the ball far too easily. Had a great chance to secure the win but his shot was the mirror opposite of his Feyenoord strike. Speed is fine, so long as it is used properly. 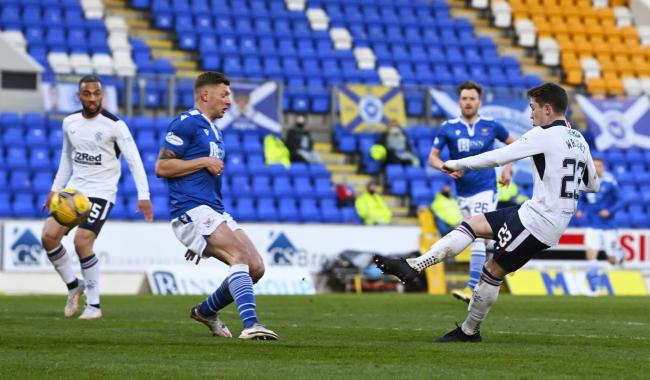 Player ratings from our draw at St Johnstone ahead of our upcoming cup tie.

23 Nov 2019
question_answer0
As far as a football contest was concerned, this was pretty poor game. It feels even poorer from a Rangers…
Menu
This website uses cookies to improve your experience. If you continue to use this site, you agree with it.
Ok